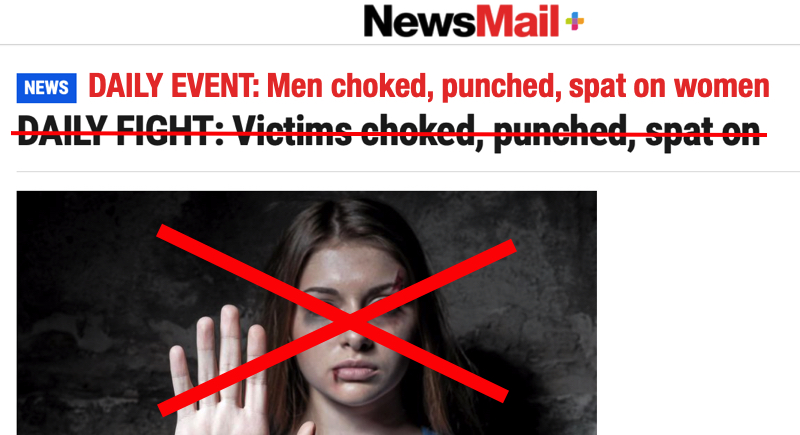 News Mail published this article about the daily occurrences of domestic violence in Warwick, QLD. The article itself does a reasonable job of reporting on domestic violence in the area. While it does include a quote from a defendant’s lawyer about how “he was intelligent and nice when off drugs”, they also quoted the Magistrate in the next sentence on “offenders sometimes believing they can commit these acts with impunity”. The offender’s history of domestic violence and contravening domestic violence orders was also included and made it clear this was part of a pattern of behaviour, not an isolated incident.

The reporter also got quotes from experts outside the criminal system, such as Domestic Violence Action Centre Toowoomba service manager Kath Turley, which added depth and context to the story. Even the quote from the police officer involved in the specific case made it clear that domestic violence is a structural and ongoing problem in the area.

So far, so good. But that headline! “DAILY FIGHT”? Domestic violence is not a “fight”, which implies a mutually agreed contest between equals. Domestic violence is a pattern of controlling and coercive behaviours that often, but not always, includes physical violence. Even the specific behaviours described in the headline are not “fights”. They are abuses committed by a man against a woman. In no way can this be considered a “fight”.

Even if you take out the first two words, you’re left with “Victims choked, punched, spat on”. Victims? What victims? Equally importantly, who are the perpetrators? It appears they are the ubiquitous “invisible perpetrator” without whom FixedIt would probably not exist.

But these women are not being abused by invisible perpetrators, they are being abused by men. On a daily basis, according to the experts quoted in this article. Given the extent of the problem outlined in the reporting, it doesn’t make sense that the source and the cause doesn’t even get a mention in the headline.

Adding to the abhorrence of the headline is the image just underneath it. The bruised woman stock image that perpetuates what the new UK guidelines on reporting domestic violence describe as reinforcing “the myth that it’s only a physical crime”. A picture of an otherwise conventionally pretty white woman with fake injuries simplifying a deeply complex crime for sensationalist click points.

It’s a shame an otherwise laudable effort by the reporter was so let down by her editors. Her work, and far more importantly, the women she was writing about, deserved better.