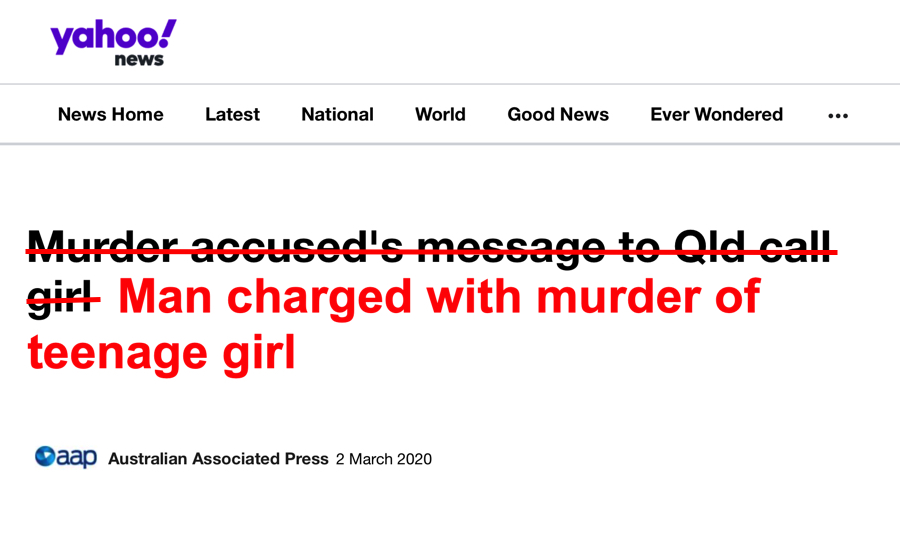 Yahoo, among many others, published a report by AAP on a the trial of a 65 year old man  charged with the alleged murder of 16 year old Tiffany Taylor.

Tiffany was a person, a teenage girl who was denied the decades of life and choices and experiences she should have had. No person is just their job but women who do sex work are invariably identified this way when a man chooses to use violence against them.

This trial is still underway and the accused has the right to the presumption of innocence. Only the court can determine whether he is guilty or not guilty. This commentary is not speculating on his guilt or innocence, it is specifically and only about how men’s violence against women is reported in the media, particularly when the women involved do sex work.

Pushing back on dehumanising sex workers is not only about rejecting the ongoing shaming and marginalisation of women who do sex work. This is about ALL women.

If any woman is not safe, no woman is safe.

A significant portion of my book was about the way men’s violence against women is evaluated by determining the victim’s moral worth. Was she young enough, white enough, pretty enough, nice enough, and most importantly pure enough to matter? Too often media, courts, police and the public will look for any excuse to diminish the responsibility of a violent man and lay blame on the woman he abused. Sexual purity has always been a measure of a woman’s worth.

Is she a slut? Then it must have been her fault. Is she an angel? Then he must have been a monster. Either way, men are not responsible and women should know better.

If Tiffany had been a high school student from the leafy suburbs, her disappearance and alleged murder would have been a national grief and outrage. Instead, headline after headline after headline identified her as a “prostitute” and a “call girl” and a “sex worker”. There was no public outpouring of fear and anger, the news was mostly met with silence, as news we determine to be irrelevant to us so often is.

Nearly five years after her disappearance, very few of us even know her name. Or if we do, almost the only thing we know about her is the work she did. Tiffany Taylor was a person and that will always be the most important thing to know about her.