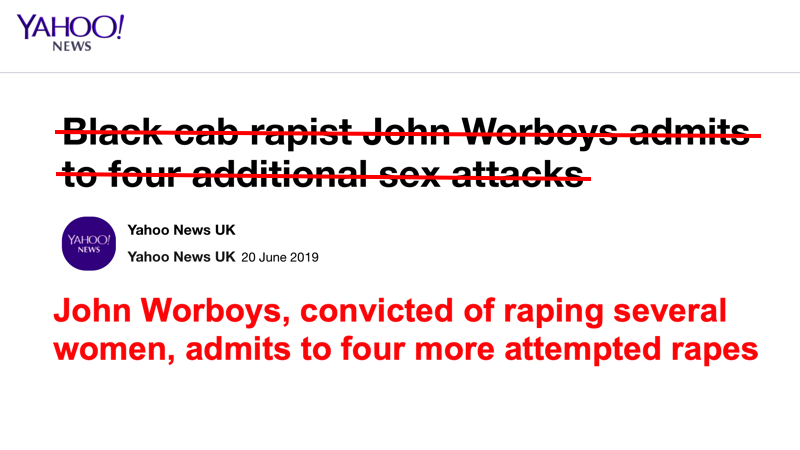 He did not rape any Black Cabs. He raped women. Lots of them. According to the article, “police believe Worboys may have carried out more than 100 rapes and sexual assaults on women in London between 2002 and 2008.”

He also did not commit “sex attacks”. Sex is something people do together. Rape (or attempted rape) is something a person chooses to do to another person without their consent, there is no mutual agreement involved. Sex and rape are not the same thing and they are not words we can use interchangeably.

This is one of the many ways in which men’s violence against women is minimised in the media. They usually fit into one of three categories: invisible perpetrators, invisible victims, or blameable victims.

In this case the alleged victims are invisible. They’re not mentioned in the headline. Their very existence was erased and replaced with the location of the alleged crime.

If you haven’t watch Jackson Katz’ TED talk on violence against women I highly recommend it. He’s talking about the general conversation about men’s violence but he perfectly demonstrates the problem with the way the media reports this stuff. I’m slightly paraphrasing his examples here, but the principle is unchanged.

It’s not the third one, that only tells half the story. It tells us about Mary but nothing about John. John was the one who committed the crime. The story is about the acts he chose to commit and the affect it had on Mary. If John isn’t in the headline it’s only telling half the story.

This is the basis for most of the work I do on FixedIt.