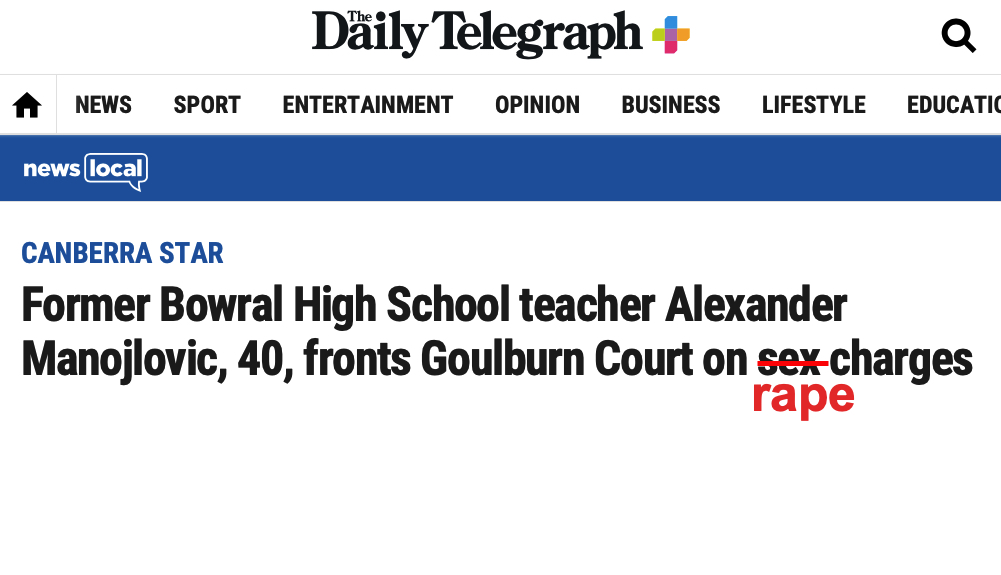 The Daily Telegraph reported on the beginning of Alexander Manojlovic’s trial for allegedly raping a 17 year old girl under a headline calling it “sex charges”.

To be clear, Manojlovic’s trial has not concluded and he is entitled to the presumption of innocence. Only the court can determine whether he is guilty or not guilty. This commentary is not speculating on his guilt or innocence, it is specifically and only about how men’s violence against women is reported in the media.

Clearly, these are extremely serious charges, which makes it all the more reprehensible that The Daily Telegraph labelled them as “sex charges”.

The phrase “sex charges” is nonsensical. No one can be charged with having “sex” because having sex is not a crime. Sex is something people do together, when everyone involved is fully able and willing to consent.

If someone is charged, they are charged with rape, which is a crime a person chooses to commit against another person without their consent, there is no mutual agreement involved. Sex and rape are not the same thing and they are not words we can use interchangeably.

This is one of the many ways in which men’s violence against women is minimised in the media and it contributes to the public perception that rape is nothing more than sex gone wrong. It is not. Rape is a choice to commit a deliberate, brutal, traumatising and criminal act. There is no fine line or grey area. Rape. Is. Not. Sex.