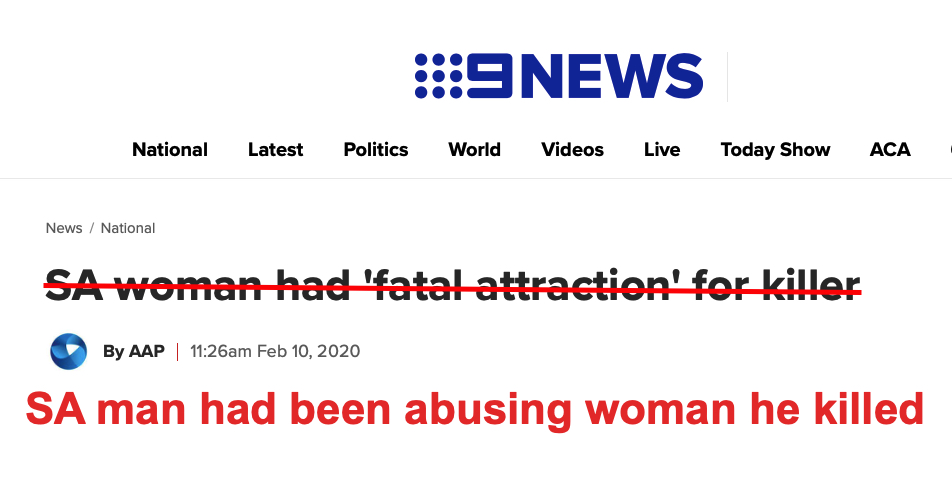 Channel Nine News yesterday published an AAP report on a Coroner’s investigation that found a man had beaten and stabbed a woman to death, then killed himself.

The Coroner found evidence of years of abuse committed by the man against the woman, and still these journalists reported it as her “fatal attraction”, not his.

Why didn’t he leave? Why didn’t he stop abusing her? Why did his attraction to her become fatal?Why aren’t these the first questions asked by journalists? Why do they continue to assume she was the one who had the power to end the relationship when he was the one causing her to fear for her life?

The Coroner’s report is heartbreaking reading. It documents years of the man committing violent assaults, stalking, property damage, threats to kill and attempted strangulation, both against the woman he eventually killed and against his previous partner. Despite multiple reports to police, charges, arrests, breaches of intervention orders and bail conditions, reports were not always followed up by police, and magistrates continued to release him on bail.

The Coroner said repeatedly that the murdered woman’s refusal to engage with police and her inability to end the relationship were typical of domestic abuse, and “neither [the woman] nor any other victim of domestic abuse should be criticised for such decisions”.

Despite this, Channel Nine and AAP found in the more than 27,000 word report the only two words that could be twisted to blame an abused woman for her own murder.

Her attraction to him was not what was fatal. His continued choice to be violent and eventually kill her was fatal. Why is that so difficult to understand and report? It’s all right there in the inquest findings and the Coroner was very clear that the victim should not be blamed. What is going on at AAP and Channel Nine that they had to twist it this way? Whatever it is, it’s inaccurate, misleading, dangerous and lazy reporting. Everyone involved should know better.

I know the names of both people are in the Channel Nine report. I have chosen not to use them or link to the Coroner’s report because the woman had children, family and friends who loved her deeply. They don’t need to see more social media commentary on their mother’s life or murder.