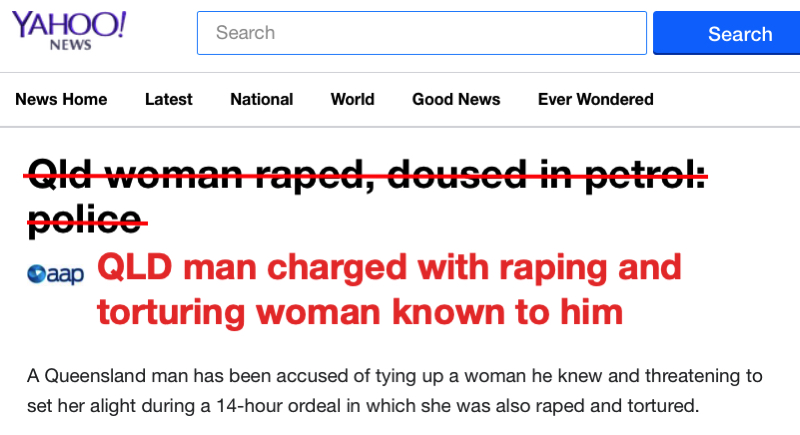 Yahoo News posted an article about a horrific crime allegedly committed by a 31 year old Queensland man, who was charged with rape, torture, deprivation of liberty, acts intended to cause grievous bodily harm and assault occasioning bodily harm.

Once again, the victim, in this case a 29 year old woman who knew her alleged attacker, was the only person present in the headline. The man, who was known to police, was not part of the story told in this headline. He is yet another invisible alleged perpetrator.

To be clear, the man has not yet been tried over these charges. This commentary is not about his guilty or innocence, which can only be determined by a court. This post is only about the way the charges against him were reported in the media.

Invisible perpetrators are a constant in FixedIt. This is not a trivial issue. It matters because headlines are supposed to be a short summary of the article and when the article is about violence men commit against women and those men are invisible, the headline is not telling the story, it’s erasing the story.

Also, most people don’t consume news by reading a print newspaper from cover to cover. Only some people go directly to the home page of a news outlet. Most people get news links from social media, and the most likely source is Facebook. But regardless of the source, we see far more headlines than we click on.