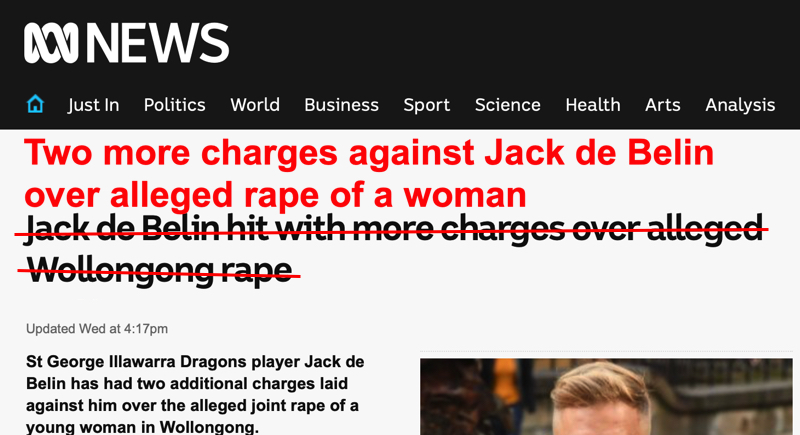 ABC News published an article about additional charges against Jack de Belin in relation to the alleged rape of a 19 year old woman last year.

To be clear, the charges have not yet been tried in court. This commentary makes no presumptions or suggestions regarding his guilt or innocence, which can only be determined by the court. This is solely about the way the charges against him were described in this article.

The woman says the alleged rape occurred in Wollongong, but as far as I have been able to discover, no one is saying that the town was raped. The woman does say that she was raped.

An alleged rape victim is a person, not the town in which the alleged attack occurred.

Also, as much as journalists are required to avoid anything that might suggest an accused person is guilty before they have had a trial, we are equally required to avoid creating sympathy for the accused. “Jack de Belin was hit with more charges”? Hit? Doesn’t that make him an object of sympathy? He hasn’t simply been charged, he’s been “hit” with charges. Hit, meaning something that strikes a blow, is not a neutral or objective word. When it’s combined with a photo of him and a description of his rugby league career, the overall effect is to personalise and humanise him.

There is certainly a public interest in reporting that de Belin has incurred additional charges, particularly in light of the NRL standing him down until the trial is over, but it is a very simple matter to report it without further dehumanising the alleged victim by implicitly creating empathy for the accused.