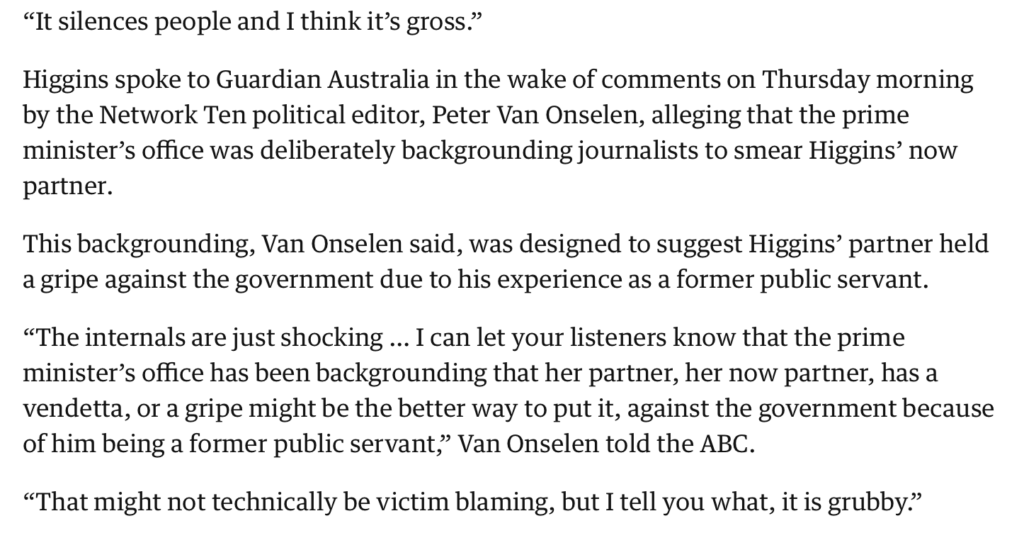 Yet another tortured woman is tearing open her veins to bleed out her trauma for public consumption, because we’re told this is the only way to make change.

Brittany Higgins’s unfathomable courage in taking on the Prime Minister’s office, along with all the structures that exist to silence the raped and protect the rapists, is gut-wrenching to watch. Because I’ve watched it so many times before. So many women give over their pain to a public that responds with grief and rage and derision and disbelief. I know they do it in the hope that change will happen, because hope is a revolutionary act for survivors of men’s malevolence.

Change and hope. We’re given tokens of change and told we must use them to paper over the things that will never change. We’re told we must believe cosmetics is transformation, even when we know it isn’t.

What has changed? Men rape women in cars and toilets and Airbnbs and homes and their friend’s houses and their mother’s bedrooms. Do we really believe the man who has not yet been convicted of raping Brittany took all the risk of passing through Parliament House security to get her into his female boss’s office, the Minister of Defence no less, and rape her in the room where a woman tells him what to do because it was the only place he could find to do the thing he a court has not yet said he did? He did not need to go where he went. He had a reason. Allegedly.

The law tells me I cannot say he raped her, even though I believe every word of Brittany’s story. The law says I have to call it “alleged” rape.

Rape isn’t rape until the legal profession, rife with misogyny, declares it to be so in a court of law.

The Australian Bureau of Statistics tells me there were over 26,000 sexual assaults reported to police in 2018. It also tells me only about ten percent of sexual assaults are reported to police, which means there was probably over 263,000 in one single year. That same year, just over 2,000 people were sent to jail for violent sexual crimes. Two men in prison for every 263 people assaulted.

I am raging. Vomiting fury onto my screen and my life because nothing ever seems to change. And I watch all the others screaming into the abyss, knowing the only people not here with us are men. Because rape, which is almost always committed by men, is a woman’s problem. Until it becomes a public relations problem. Then it’s a matter for the courts and an inhouse review.

I wonder what would have happened if Morrison had sons instead of daughters.

previous
FixedIt: Blaming women for men's violence is not journalism
next
Fixed It: This is not a cute little story
Subscribe