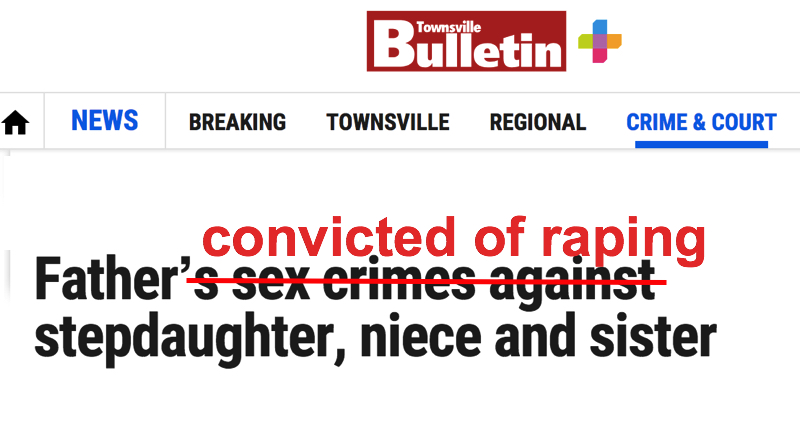 The Townsville Bulletin reported that a 34 year old man has pled guilty to multiple charges relating to the rape and sexual abuse of his niece and step-daughter, as well as raping his young sister when she was a child and assaulting his own children.

The man was sentenced to 17 years in prison with a requirement that he serve at least 80 percent of that term in custody.

Despite the severity of the crimes, as indicated by sentence, the Townsville Bulletin still referred to his lifetime of violently criminal behaviour as “sex”, albeit with the word “crimes” stuff in afterwards. It might sound like it’s getting down into the weeds here but it isn’t. Sex and rape are not the same thing.

Sex requires consent, children cannot legally or morally give consent so it is not sex. Rape, sexual abuse and sex are not the same thing and they can not be used interchangeably in headlines.

Children cannot have “sex”. It is ludicrous and abhorrent to describe any attempt to abuse a child so young as “sex”.

previous
FixedIt: Idiotic ideological battles are not an excuse for violence
next
FixedIt: he wasn't convicted of covering up "sex"