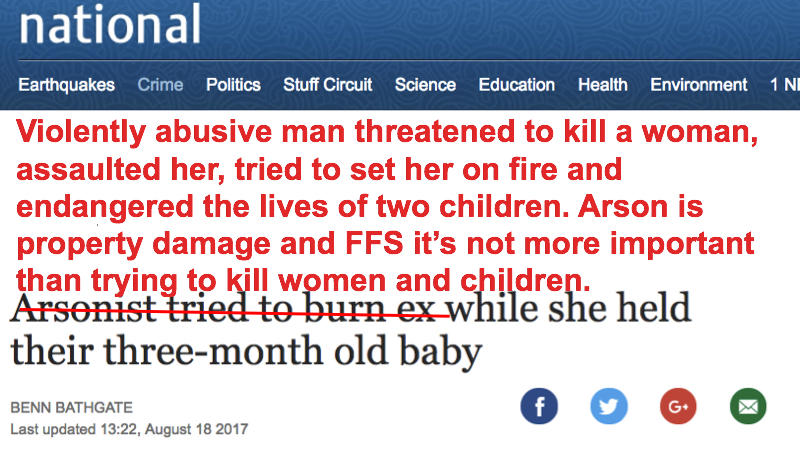 This one from New Zealand, where a violent man tried to kill a woman, his ex-partner, and put the lives of her two children in serious danger.

Under New Zealand law, arson is defined as damage to property. It’s considered more serious when the property damage could endanger human lives, but the basic offence is about property not people.

Shiva Lachman Anand, 33, pushed the woman against a wall, put her in a stranglehold, yelled “You’re going to die bitch” and then he poured petrol over her, while she was holding their three month old baby. Her nine year old daughter was also in the room.

So, yes, he is an arsonist, in that he caused property damage by deliberately starting a fire, but how is that his most serious crime? He tried to kill a woman, even the judge described it as “an extreme example of domestic violence”, why is he defined in the headline by the damage he did to property, not the damage he did to this woman and her children?

previous
FixedIt: another invisible murderer, another blameable dead woman
next
FixedIt: Tinder didn't repeatedly stab a woman and try to kill her, Paul Lambert did
Subscribe