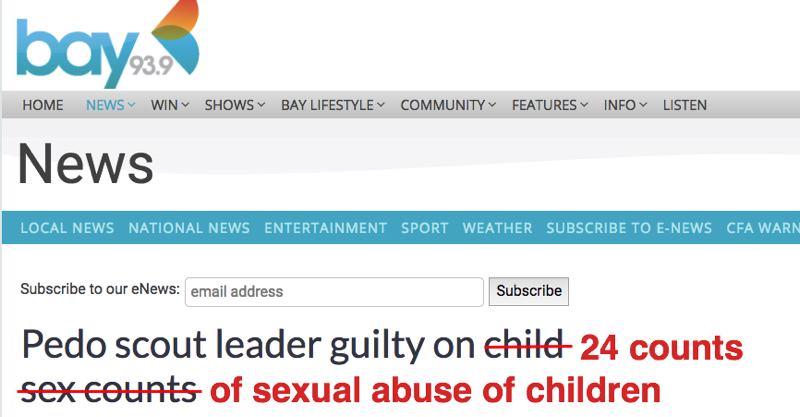 Neville Raymond Budge, 56, was found guilty of 20 charges of an indecent act with a child. He then pled guilty to a further 4 charges.

The victim impact statements from the trial are harrowing, a testament to the lifelong injuries suffered by people who were sexually abused as children. They are the litany of drug addition, alcohol dependence, gambling problems, depression, crippling anxiety, relationship breakdowns, suicidal thoughts, shame, self-hatred, mistrust of others and long term emotional damage so common in survivors of child sexual abuse. Children who have been abused are also significantly more likely to suffer further abuse, both as children and as adults.

When the media, as it so persistently does, labels sexual abuse of children as “child sex”, we are weakening the public understanding of the extent and effect of such abuse. This has serious effects. A study conducted forRoyal Commission into Institutional Responses to Child Sexual Abuse found that juries who have a better understanding of the facts of child sexual abuse are less likely to make mistakes in their assessment of evidence given in court.

That list is why the words we use to describe these crimes matter.

As I’ve written so many many times before, children cannot have sex with adults. Sex requires consent and children, by definition, cannot give consent, so it’s not sex. It’s rape, it’s child abuse, it’s sexual abuse, it’s any number of terms that accurately describe a crime. An act perpetrated on an innocent victim, someone who was unable to defend themselves from the violence done to them, and who suffers for years, possibly decades, from the trauma caused by an adult’s choice to commit that violence.