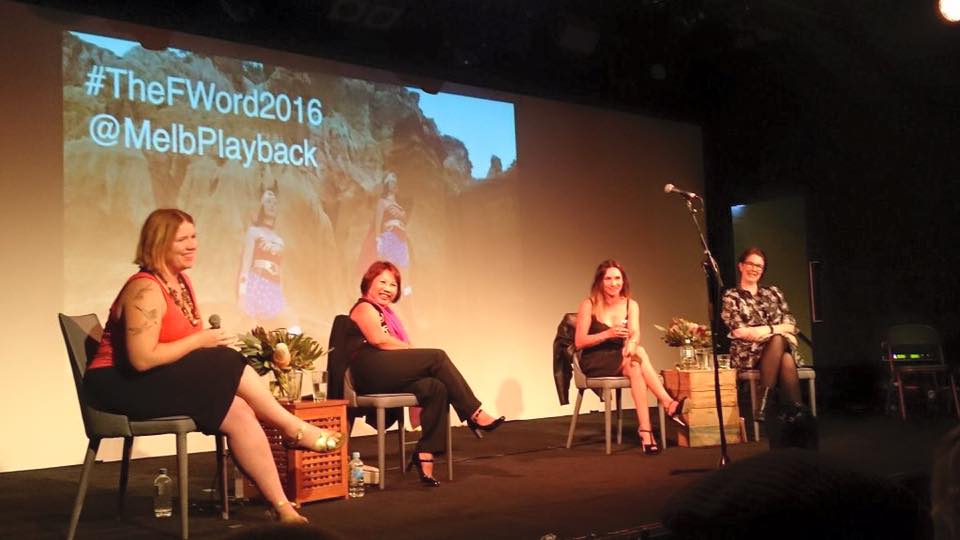 I was honoured to be asked to speak at the Melbourne Playback’s International Women’s Day event, The F-Word. The topic was the journey to feminism. This is the speech I wrote, and I think I remembered to say most of it.

The feminism journey, eh? Well that can be a rocky road, paved with pieces of actual rocky road as you sit on the couch rageeating ice cream, yelling “I can’t believe we’re still protesting this shit” and “shut up about notallmen I DON’T CARE BOUT NOTALLMEN”.

I wish I had some road to Damascus story about becoming a feminist, or one shinning moment when I sprang, fully grown, from the brain of Roxanne Gay. But I don’t. All I’ve really got is a series of seemingly unconnected events that slowly changed the way I see the world. I think my story is boringly typical, but it made a profound impact on my life. Feminism made what was once a very small world much larger.

I came to feminism quite late, the nineties were taken up with existential angst and bad poetry, there wasn’t room for much else.

Then, when my children were very young and I figured that I’d need money to do things like feeding and housing us all, so at 27, I went back to uni to become an accountant.

I had two kids under 4, I was kinda sleep deprived, maybe that’s why it made sense.

Anyway, I was working, studying and raising children. It didn’t leave time to think about much else.

“What are we going to eat tonight, when am I going to get this essay done, what even is economics, it’s like astrology, it’s stupid. How much do I need to remember to pass this exam? No, you can’t have a puppy and yes you do have to wear shoes”. That was pretty much the entire contents of my brain between the ages of 27 and 32.

Then I finally graduated and instead of being an accountant, I ended up consulting in the energy industry. I’m still not entirely sure how that happened, but it did, and suddenly I found myself in this very male dominated world. I was almost always the only woman in any room I was in and, at first, all I was trying to do was prove it didn’t matter. I could keep up with the men: “look how hard arse I can be, there’s no joke you can make that will upset me, come at me bro”.

It was also a very white industry, not just no women, but no people of colour, no one with disabilities, no queer people, just a steady stream of white men in navy suits.

After a (not very long) while, all the little things about being alone in a sea of dudes started to grate. All the unapologetic interruptions, the casual assumption that the difficult work was done by men, that my very presence was only tolerated, never accepted, the constant remainders that I was in their space not mine.

There was a guy I was working with, he was junior to me in every way – in age, knowledge, experience and skills. But I couldn’t count the number of times I had to correct the men who assumed I was his assistant.

I thought it was enough to stay strong by being strong.

But it wasn’t, and I couldn’t hold off that recognition for ever.

Part of the change was that, for the first time, I had money. That prize I was chasing all those years of having none. And I realised that I had to choose between giving all my time to chasing more money, or defining “enough” money and taking the time for something else.

And that was when my world started to open up a little bit.

Time gave me the opportunity to look around, see more than just my tiny little world, and think about the larger world in different ways.

I started reading more, seeing more, and in doing so, found that it was only men’s stories being told. I had to search for women’s stories, and, unsurprisingly, only found them in spaces that were entwined in feminism.

So feminism started creeping up on me, but in the beginning it was about only me, my life and my needs and the denial of them.

My choice to wear what I want, do what I want with my body, my job, my children, my name. Feminism gave me power and the patriarchy was only the men trying to deny me that power.

Which is fine and it makes for great table-thumping arguments in bars, I had great fun with that for a while. But the journey goes on and just as I, in all my naive arrogance, had decided I had everything figured out, suddenly there was so much more to learn.

Feminism as a theory, is about equality.

But what does equality mean?

Equality with who? Men, obviously, but which men? Are all women supposed to aspire to be equal to Tony Abbott or Andrew Bolt?

I started to realise that equality is a bullshit term, it doesn’t really mean anything. It’s a word I was throwing around all the time, but I couldn’t really define what it meant because it inequality is everywhere, there was no baseline, nothing specific to fight for.

That was when feminism stopped being a theory to me and became a collective movement, not about equality, but about liberation.

Liberation was something I could make sense of, because it didn’t mean that women had to fight to become like men, it meant we all had to fight to everyone from the confines of the demeaning gender roles that imprison all of us.

Those roles, assigned by gender, became the source of all thing things I wanted to fight against, which mainly came down to female poverty and male violence.

I started to understand more about the constructs of gender, and the inherent oppression in perpetuating gender roles that codify female economic disadvantage and validate male violence.

It would be great if we lived in a world where money wasn’t so important, but until people like Clem and Celeste have smashed the capitalist system, we do live in that world. And what I was saying before about money giving me time, the other thing it gives us is power. Power over our own lives, power to influence other lives, power to push back against the powerful.

Money and violence, they are the tools of female oppression and it permeates all our lives in so many insidious ways.

And every time you see one more thing, one tiny injustice, one more example of the roles we are all expected to take and the power distortion they create, even in the smallest of ways, you can’t unsee it. Then you see it again, and again, and again, and you can’t forget or ignore because they suddenly loom over every interaction you watch.

Of course, after training as an accountant and working as an energy consultant, the natural progression was becoming a feminist writer.

So I started reading more and researching stuff, my world got even bigger, and my understanding of feminism changed again. The collective movement, acting for liberation, not choice, was about all women, not just me and the women I understand because they’re like me.  I started to know more about all the lives I didn’t know about and came to understand that in a collective movement, I am not free unless all women are free.

As much as it made more sense, it also became much more challenging. “More stuff for me” feminism is easy. More understanding of lives unlike mine, is not. I had to learn to understand the comparative freedom I had, set against the lack of freedom other women had. And that can be a hard thing to face.

Because I live in Australia, the unavoidable comparison was the lives of Aboriginal women. I may not be the perpetrator of atrocity against Aboriginal people, but I am undoubtedly the beneficiary of it.  That’s a tough thing to face, it’s shameful and I’m a feminist and an ally, I don’t want to feel shame, I want to be proud of what I do. Where’s my milk and cookies?

But, no matter what we do to avoid it, all of us living in Australia carry shame about what was done, what is still being done, to Aboriginal people, and the reparation for it is to step aside, make room, give up our own space, sit down quietly and listen. It can be tough, I’ve worked hard to have a voice and a space in the world, I don’t want to give any of it up.

And yet, I ask, I demand, that men step back and give space to women, that men who still benefit from millennia of entitlement to power give some of it up to liberate women from the lack of it.

I can’t demand that of men unless I’m willing equally, to give up the benefits of whiteness, of wealth, education, able body and confirmative sexuality to women denied such things.

It took too long for me to really understand that, and honestly I’m not always good at it. The assumptions entwined in a lifetime’s belief about the world and my place in it are not easy to eradicate. But the collective movement of feminism, that I am so proudly part of, come with a requirement that I keep dismantling those assumptions, and doing more to understand their causes and effects, and keep picking away, not just at men’s place in them, but mine as well.

So basically, the story of my journey to feminism was a series of me being wrong about things.

I’m ok with that, in fact, I hope it will continue to be so. I know there’s so much more to learn and I hope in ten years’ time I will look back on what I said to you all tonight, curl a bit in horror, and think “I can’t believe I said so much and understood so little”.

Change is agonisingly slow. But we’ve come so far in the last two hundred years, more than we did in the previous five thousand. It will take too long to get to where we need to go, but we also know we can’t give up, because unyielding determination is the only weapon we have that can never be defeated. And I think that determination comes from all of us (because as much as I’d love to think otherwise, my journey was not special or unique) slowly understand the breadth of injustice that gives so much power to so few people, and steadfastly refusing to accept it.