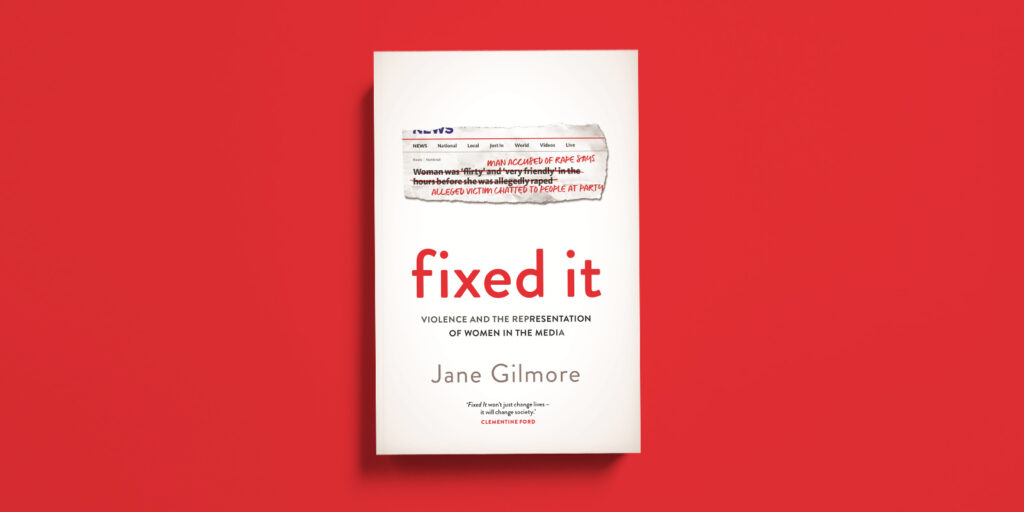 This is an extract from my book Fixed It: Violence and the representation of women in the media, which you can buy from Readings, Booktopia, Amazon, Audible or the local bookstore of your choice (choose local if you can).

This extract is from a section talking about the influence media has on how people think about men’s violence against women and the danger this can present to women who want to escape a violence partner.

Leaving a relationship that isn’t abusive is difficult, heartbreaking and exhausting. Imagine how much worse it can be when you’re also trying to unlearn years of grooming that taught you to have no faith in yourself and a lifetime of the world reinforcing to everyone around you that women are responsible for men’s violence, lie about men’s violence and should be the only ones to suffer the consequences of men’s violence.

Chapter 8 – Victims, perpetrators and the people who support them

It is dangerous for women who have experienced violence from men to live in communities where people might blame them for the violence someone else chose to enact against them. Crisis and support services need funding and government support to offer effective help to the hundreds of thousands of women who need it. They need to connect to police and courts, banks and welfare agencies, doctors and mental health workers, schools and work, housing and utility services, and they need to know those institutions will support them. An Australian woman told me her story of trying to escape her abusive husband and it’s a sadly typical example of the dangers and barriers women face when they try to leave violent men.

Jenny* tried to leave her abusive husband, Andrew*, four times before she was finally able to escape. The first time she tried to leave was in the 1990s. Services for women in violent families were much more difficult to find, and she found her attempts blocked by basic logistical obstacles. Because she was still married, she quite simply could not get a lease, electricity supply, medical care, new schools for her kids or bank accounts in her own name without risking him finding her address. The organisations either required a co-signature from her then husband or would make her new address available to him.

I was like a rat in a maze. Every time I ran down another alley I’d hit a wall. When we were married he’d always insisted on putting everything in his name – lease, bills, bank accounts, cars, insurance, everything. At first I didn’t realise that it mattered and later I was too scared of him to do anything about it. So the first time I tried to leave I had no rental record, no credit, no money of my own and whenever I tried to get anything they’d either want to check with him to verify my identity or they’d want to put things in both our names. Schools wouldn’t take the kids without both of us filling in the forms, even though I had police reports and had started divorce papers. Landlords wanted references and they’d tell me they ‘couldn’t promise’ that he wouldn’t find out about the application. If I told them I was in danger from him I wouldn’t get a lease. I could see it on their faces: I was ‘trouble’. If I didn’t tell them they’d ring him for a goddamn reference. It was unbelievable. I had a job but when I tried to buy a car they wouldn’t give me finance without his signature because we were still married. I paid the extra fee to get a silent phone number but one of the times we moved out he got our address from the electricity company. Another time it was through the husband of one of my friends. That bloke had always believed Andrew when he told people I was treating him badly and going to take the kids off him, so he felt sorry for him and said he was just trying to help him out. Every time I went back to Andrew it would all start again but he kept promising he wouldn’t hurt me again and he’d get so angry when I said no. It sounds crazy but I felt like I’d be safer if I moved back in with him and kept him happy than if I stayed where I was when he was so furious and could turn up any time he liked.

Over time, as services for women fleeing violence slowly improved, Jenny was finally able to escape. With the help of police, intervention orders and one of the very few domestic violence support services available at the time, she got a lease and moved to a new home with her children. Both Jenny and the police believed she had done everything she needed to do to make sure Andrew couldn’t find her new address. They were wrong. Police are still not sure exactly how he found out where she was living. He won’t say but Jenny thinks it’s possible he simply followed her home from work.

He tried it lots of times. I’d see his car across the street or catch it in my rear-view mirror. Every time I saw him, I’d drive straight to the police station. Sometimes they’d be great; sometimes they’d carry on like I was just a pain in the arse. It all depended on who was on the counter when I got there. Maybe he borrowed someone else’s car one night ‘cause I was always really careful. I never ever stopped watching for him.

Despite multiple breaches of intervention orders, like waiting out- side her work and following her home, ringing her and threatening to kill her, telling their children she was a manipulative bitch who didn’t really love them, that she was just doing things for them to make him look bad, and stalking her when she went out with friends, Andrew was never imprisoned. He had multiple court appearances that ended in fines, intervention orders, good behaviour bonds, suspended sentences and stern warnings. This went on for nearly a year until one night he came to Jenny’s home with a knife, kicked in her door and tried to kill her. One of her children, then only twelve years old, was quick enough to hide under furniture with a phone, call the police and stay on the phone so they could hear Jenny scream as she was being cut. Jenny had deliberately chosen a house close to a police station, a decision that probably saved her life that night because two carloads of police arrived in time to stop him before he killed her. Jenny was hospitalised with multiple stab wounds and Andrew was charged, convicted and imprisoned for attempted murder. The child who hid in the house that night, listening to his mother being stabbed, remains deeply traumatised.

Andrew is due for release soon, so Jenny has changed jobs and left everyone at her old workplace with a detailed description of him and how to respond if he turns up. She calls it her ‘death-cheat-sheet’. It’s a document she’s assembled with photos of him and all the history, convictions and current court orders, as well as police contact details for anyone who hears from him. She’s handed the death-cheat-sheet to all the people he might contact if he tries to find her or her children again. So far this has included: her children’s schools and workplaces, parents of children’s schoolfriends, her eldest child’s partner, their parents and sib- lings, local police, family violence services, banks, utilities, her landlord, the bond agency, doctors, sporting clubs, social media, friends, family and extended networks, dentists, road toll organisations, Centrelink, eBay, the electoral roll, the tax office, superannuation accounts, lawyers, loyalty card companies, the car registration organisation, the local council and the local vet. She’s not sure if she’s covered every option and she knows there is a huge number of people who all have to be constantly vigilant about his manipulations and detailed knowledge of her life and habits.

If any one person at any of those places slips up, even once, and he is able to find her, she firmly believes he will kill her.

It’s a lot better these days but you still get people, you know, rolling their eyes and thinking I’m making a big drama of it all. Or they think I’m just being a bitch and not letting him see his kids. That’s why I did the death-cheat-sheet. Seeing the attempted murder conviction in black and white makes a difference, even to the blokes who feel a bit sorry for him because they think, ‘Oh, poor bugger, he just wants to see his kids.’ The big organisations, they all have those privacy regulations, but he knows my date of birth and all kinds of other details and he has the marriage certificate. Most people aren’t going to check whether a husband has tried to kill his wife if he pretends he’s just trying to pay her phone bill or something like that. He’s smart – that’s what scares me.

It should be unlikely he’d be able to fool any of the large organisations now: they almost all have accounts for people like Jenny flagged to prevent exactly the situation that scares her. But she is one persuasive conversation, one person who believes women lie about domestic violence, one sympathetic interaction away from someone giving her address to the man who abused her, stalked her and eventually tried to kill her. He’s got a four out of ten chance of finding her, according to the National Community Attitudes Survey. Damn right she should be scared.

* Jenny and Andrew’s names and some identifying details have been changed to protect her life and the lives of her children.

If you want to read more, you can buy Fixed It: Violence and the representation of women in the media from Readings, Booktopia, Amazon, Audible or the local bookstore of your choice (choose local if you can).

previous
Fixed It: Turning music off does not cause violence
next
Fixed because blatantly deceptive scaremongering is not journalism
Subscribe