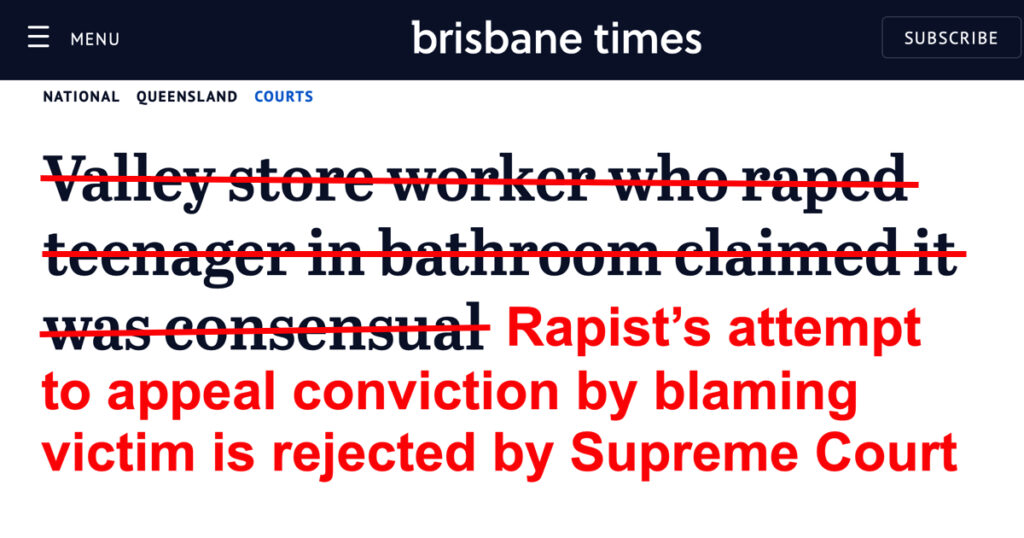 The Brisbane Times reported that a man convicted of raping an 18 year old woman attempted to appeal the conviction by blaming the woman he raped. The court denied the appeal.

The evidence showed the rapist initially lied about having physical contact with the woman and told police he had never had sex before. The DNA evidence proved this to be a lie, so hethen claimed the rape was consensual sex.

The jury believed the woman’s testimony and the forensic evidence, and he was found guilty.

Despite this, he was still allowed to appeal the conviction, further traumatising the woman he raped. He was allowed to use rape myths against her by claiming she didn’t fight or scream and that she was intoxicated when he raped her. These claims were rejected by the jury at trial and by the judge on appeal – in the state that has Australia’s worst conviction ratefor rape.

And after all this, The Brisbane Times STILL ran a headline that restates the rapist’s debunked claim and erases the court’s finding against him.

Innocent even after proven guilty (twice)?

(as always, if you’re reading this on social media, links are in the OP at www.patreon.com/JaneGilmore )

If you would like to know more about how and why the media’s erasure of men’s violence against women occurs, the Fixed It book is out now! Buy your copy here or at any good bookstore. Extracts available on why Fixed It started inThe Guardian, rape and other violence myths in The Age/Sydney Morning Herald and the Good Guy trope on my website.

previous
Fixed It: Something is missing from the headline
next
FixedIt: Focus on perpetrators was the announcement