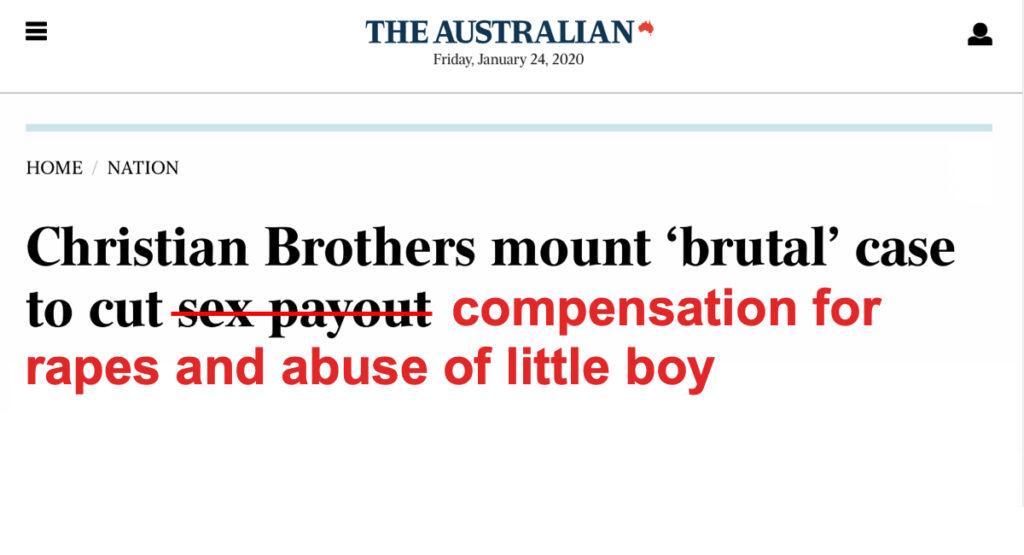 The Australian reported on a civil trial where a man is seeking compensation for “horrific” rapes and abuse committed against him by members of the Christian Brothers. The Christian Brothers have admitted to the abuse. The case is now focussed on the damages the organisation owe him for the trauma inflicted by their members.

The trial is ongoing and only the court can determine the level of compensation owed to the man who has had to live with what was done to him when he was a helpless child. This commentary is not about the outcome of the trial, it is only and specifically about the way the crimes committed against the survivor are described by the media.

I am going to keep repeating this as often as I need to (which appears to be a lot). Sex and rape are not the same thing. The horrific violence inflicted on this little boy by men who were responsible for caring for him was not “sex”. It was rape. It was abuse. It was a betrayal of a trust given to them, and the man who survived it (just) has paid far too high a price for those men’s belief that they were entitled to abuse him without consequence. None of these things are “sex”.

The survivor is not after a “payout”, which implies he’s seeking an advantage. He’s asking for compensation for crimes committed against him and the suffering he has had to endure because of those crimes.

I struggle to understand how anyone could view this as a “sex payout” but apparently someone at The Australian does and this should not be allowed to pass without comment.

previous
Fixed It: Again, this is not what the court heard
next
Fixed It: WHAT????
Subscribe