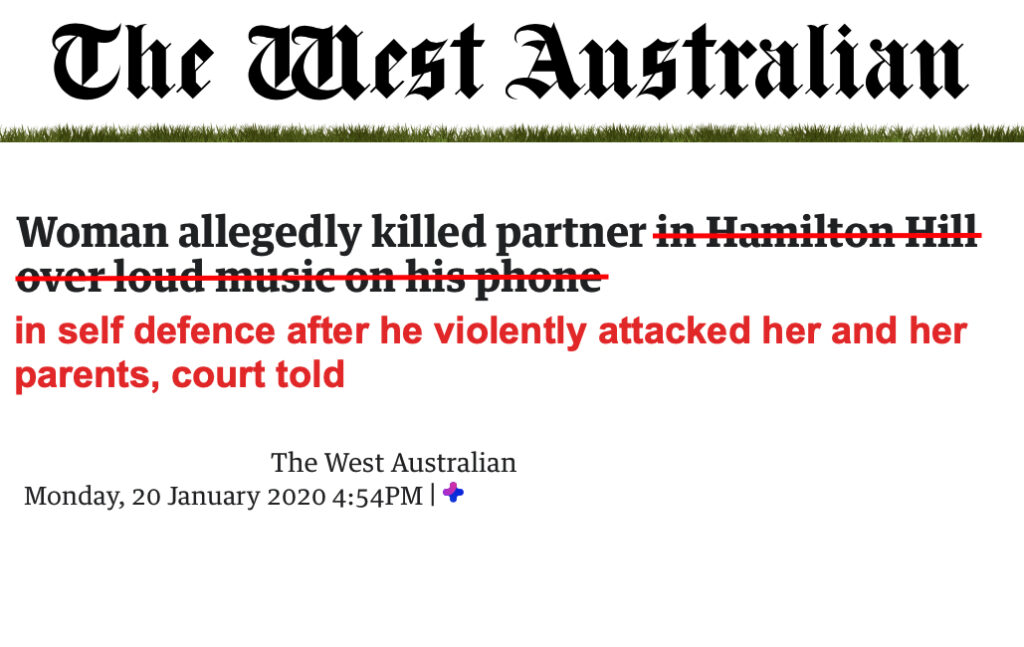 The West Australian published an article yesterday about Tracey Bridgewater’s trial for stabbing her partner, Nicholas Josephs, to death. Despite the inaccurate and misleading headline, evidence given to the court was that Ms Bridgewater acted in defence of herself and her parents after Jospehs attacked her, then repeatedly punched her father, fracturing his eye socket and rendering him unconscious. Her mother tried to intervene and Josephs allegedly grabbed her by the hair and threw her to the ground. The court also heard that Josephs was threatening to kill Ms Bridgewater and her parents during the alleged assault.

The prosecution is not disputing evidence about the assault, it is however contending that Ms Bridgewater “drastically escalated an already tense situation” by stabbing Josephs in the chest and that this “could not be excused by law”.

The trial is still ongoing and only the court can determine whether Ms Bridgewater was acting in self defence. This commentary is not about her guilt or innocence, it is solely and specifically about how evidence presented to courts in these type of cases are typically reported in the media.

Nowhere in the article about the trial does either the prosecution or the defence suggest that Ms Bridgewater stabbed Josephs because of loud music. They agree she stabbed him because of the violent attack on her and her parents, but disagree on whether this was lawful or reasonable.

Research on media reporting of the rare instances of women killing their male partners shows they are more likely to be sensationalised, trivialised, blamed and portrayed as “bad, mad or sad“. Additionally, the context of gendered violence, where such murders almost always occur in self defence, is often dismissed or minimised.

This misleading and inaccurate headline is typical of the way the media misrepresents gendered violence and perpetuates the myths that sustain and excuse it, i.e: that women are always and men are never responsible for the choice to be violent or the consequences of that violence.

previous
Fixed It: Leifer is not accused of "sex"
next
Fixed It: Again, this is not what the court heard
Subscribe