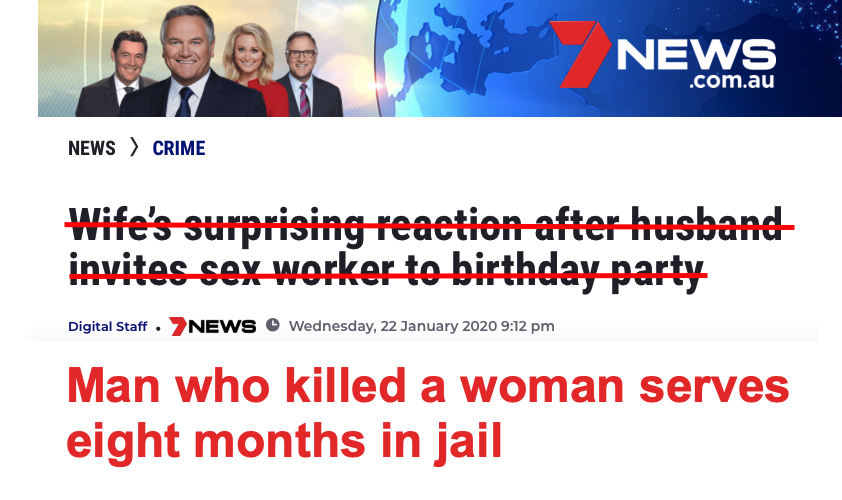 Channel 7 News reported that a Russian man who was initially charged with murder served eight months in prison after shooting a woman in the head because the charge was downgraded to “inflicting death by negligence”.

Inexplicable, the headline for the story was that the man’s wife has forgiven him for inviting the woman to their home.

Usually in these posts I have some kind of some explanation or comment on where the headline went wrong. This time, I don’t even know where to start. The court found there was no intent to kill when a man got a gun from his bedroom during an argument with a woman, and she was shot in the head when she tried to fight him off. Ok, sure. The woman did sex work and I’m sure this had nothing to do with the outcome of the trial but how do you get from that to this headline? A woman is DEAD! The man who killed her is free! Surely this at least rates a mention? Surely it is more important than the state of the relationship between the killer and his wife?

It is staggeringly revolting that killing a woman is so irrelevant that it doesn’t even make it to the headline above an article about how she was killed, and it is impossible believe that this would have happened if she had been a teacher or a hairdresser. It’s because she was a sex worker and shows how women’s lives and deaths are valued by abhorrent perceptions of their moral worth.

She was a person and she was killed. These are the facts and they matter. What she did for work does not change these facts and is not relevant to how much they matter.

previous
Fixed It: It wasn't "sex" and he's not asking for a "payout"
next
Fixed It: 45% is not where women "dominate" a list
Subscribe