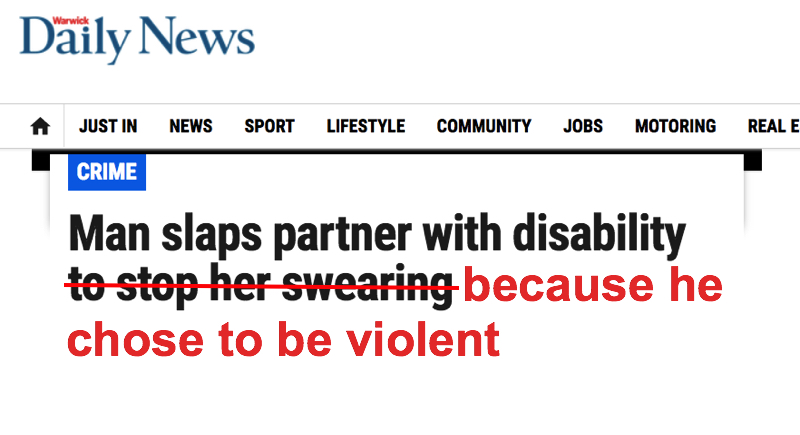 The Warwick Daily News reported that a 64 year old man was convicted of slapping and shoving his partner who has a disability.

The magistrate said the circumstances were “not an excuse” and described the attack as “cowardly”. Despite this the Warwick Daily News still included the abuser’s attempt to blame his victim’s disability in the headline.

The World Health Organisation has also concluded that people with disabilities are at “much higher risk of violence than their non-disabled peers” and this is because of their vulnerability and the difficulty they have being heard and believed if they attempt to report the violence they have experienced.

All too often however, the media presents disability as a cause or an excuse for violence.

As Stella Young wrote so eloquently about Greg Hunt murdering his wife and children, “When we hear of a crime like this, we quite rightly recoil in horror. And yet, when we hear that a murdered wife is also a woman with a disability, we can find ourselves a little bit less horrified. As though her status as a disabled woman gives us a little more empathy towards the perpetrator of violence. It’s victim blaming at its very worst.”

Victim blaming in the media is sometimes overt, but usually it is implied. Excuses for violence, sympathy for abusers, highlighting victim’s actions or characteristics over the choices made by abusers. If anything, the implicit nature of this kind of victim blaming is more damaging than directly blaming victims because it endorses and perpetuates subconscious bias that constantly remove responsibility for violence from the men who perpetrate it.

previous
FixedIt: Which quote did you choose?
next
FixedIt: No adult can plan "sex" with a 2 year old
Subscribe