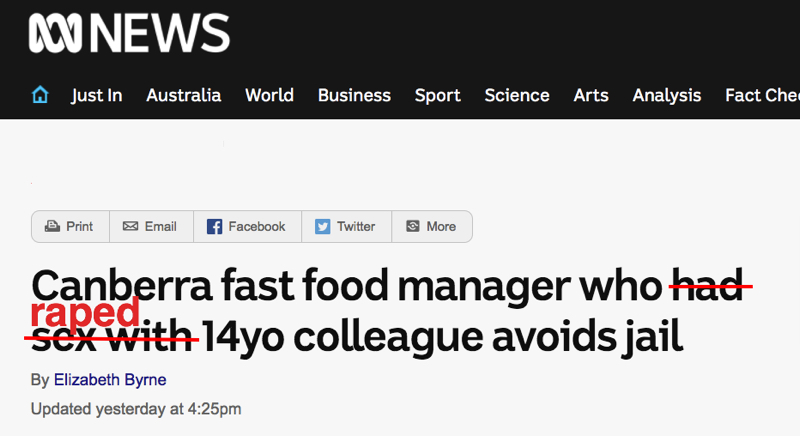 Since this article was published yesterday afternoon it’s generated hundreds of comments. Both the reporting and the judges’ comments have attracted opprobrium. As they should.

It’s interesting that the ABC reported on a very similar case in Canberra last year, but had no difficulty clearly labelling that crime as rape. 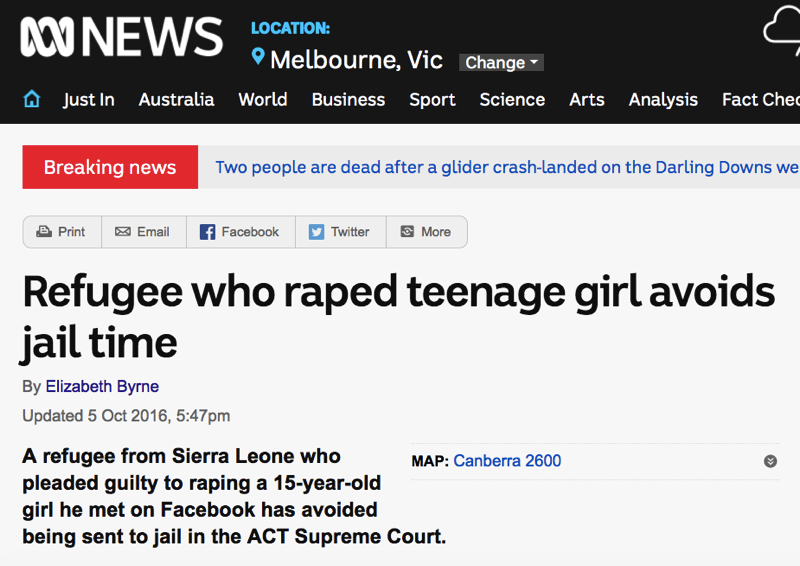 There’s a couple of reasons the ABC might have chosen to report yesterday’s case as sex rather than rape.

The main one would be that there is no offence of rape in the ACT criminal code. There are degrees of sexual assault and Section 92E of the ACT Crimes Act called “sexual intercourse with young person” with a maximum penalty of 17 years in jail if the child is under 10 years of age and 14 years if the child was under 16.

“Sexual intercourse with a young person” was the charge the Canberra man was convicted on, so it would not be completely accurate to report that he was convicted of rape.

Defamation might have been another concern, but it seems unlikely. Calling this man a rapist or describing his actions as rape is a realistic description and therefore not subject to a defamation claim.

Jason Deputy Director of the Centre for Media and Communications Law at Melbourne Law School said, “from a defamation perspective, while rape might not reflect language used in ACT legislation, does it reflect the actions of what he did, so it’s substantially true. Defamation would not be an issue here.”

So, while the ABC would have had to specify the charge, they were not legally obliged to describe his actions as “sex”. They could legally and accurately have called it rape.

The case last year where they did call it rape was very similar to this one. The charge was the same, the victim was 15 years old and the perpetrator was 21 years old. The only real differences seem to be that the victim in yesterday’s report was one year younger and was working for the man who raped her.

And also that man who was labelled a rapist was a refugee from Sierra Leone.

The ABC was approached for comment but requested more time to make a considered and researched response. The response will be posted here when it comes.

The other issue in yesterday’s article were the reports of the Justice Elkaim’s comments that there was “no predatory behaviour”.

This is one of the many problems with court reporting when media resources are so limited. If the reporter had been able to sit in court throughout the entire trial and report on all the evidence presented to the court we might be able to better understand how a judge could think that an adult pressuring a child for nude photos isn’t predatory. With the limited details available it’s impossible to know whether this is the staggering misunderstanding of predatory behaviour that it appears to be.

A more detailed report from The Age gives a better perspective.

There wasn’t any evidence of “predatory conduct derived from the offender’s position of seniority”, he said.

“It may be that the victim was influenced by him being a manager but the evidence does not reveal that he took advantage of this fact.”

It appears from this report that the predatory behaviour the judge was referring to was actually in relation to his position as her employer rather than his position as an adult.

Further details from The Age article suggest the judge is well aware of the reasons adults are charged with a crime when they sexually abuse children and label it a “relationship”:

“However, it is important that I specifically mention the offender’s attitude to the offences being consensual,” he said.

Justice Elkaim said there was “very good reason” a young person under the age of 16 was unable to consent to sex under law.

“There is an important difference between a person agreeing to have sexual intercourse with another person and giving informed consent.

“The latter involves a consideration of all manner of social, emotional and physical matters that the law says a person under the age of 16 is incapable of considering. The law is absolutely correct.”

Given Justice Elkaim’s demonstrated understanding of the crime, the sentence is difficult to understand, and it was the subject of some commentary on social media. Without having been in court or having access to the full documents explaining the reasons for the sentence it is impossible to second guess the judge. A suspended sentence for a crime where the maximum sentence is 14 years does seem very light, but there may be reasons for this that have not been reported in the media.

It’s worth noting that both cases reported above by the ABC involved the same judge and both perpetrators were convicted but were given suspended sentences.

It will take some time but FixedIt will look at similar cases in front of other judges and other trials before Justice Elkaim to see if this is a standard sentence for crimes of this nature or an unusual leniency in his trials.