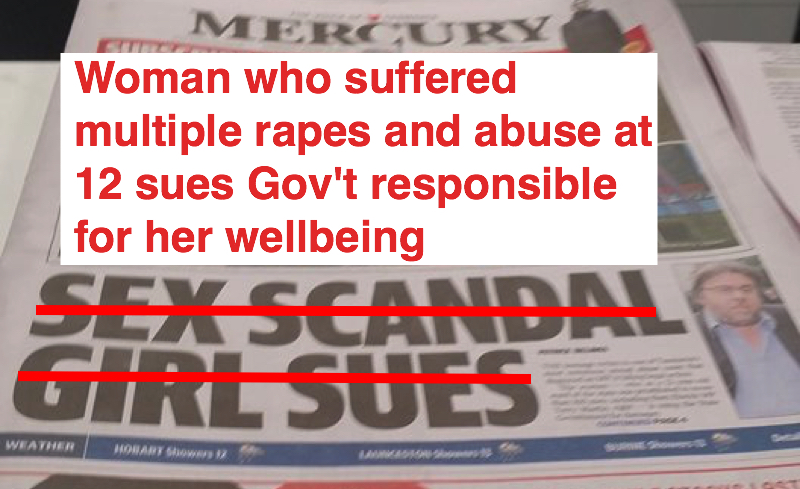 The Mercury’s front page yesterday called one of Tasmania’s worst cases of child sexual abuse a “sex scandal”. Why? Because a powerful white man (former state MP Terry Martin) was found guilty of raping the 12 year old and taking pornographic images of her.

As a 12 year old girl and ward of the state, she was sold to up to 200 men by her mother and stepfather.

Only one man was charged with the rape and abuse of this child because police either could not identify the rapists or could not prove beyond reasonable doubt that the men who paid money to rape her couldn’t tell the difference between a 12 year old and an adult woman.

This is not a “sex scandal”. It was a monumental failure of state care in looking after a vulnerable child. It was grotesque abuse of a helpless girl by her mother and step father. It was revolting choices by the men who raped her to pay money to rape and abuse a 12 year old girl.

The victim in this case is not a “disgraced former MP”, it’s the child who was abused so terribly.

The men who colluded with her step father and mother to abuse her were not committing “sex acts” they were committing rape and sexual abuse of a child.

And describing it as “renting the girl” is obscene. She was not an apartment or a car, she was a person and a child who had no ability to consent to what was done to her and no one to help her make it stop.

The Mercury’s reporting of this case was terrible, but they were certainly not the only ones.

This girl was not a sex worker. She was the victim of abuse. Describing her as a “prostitute” implies she had some choice in what was happening to her. She was 12 years old and at the mercy of clearly abusive parents and hundreds of men willing to collude with them in their abuse. She had no choices.

She’s not a “sex scandal”. She’s not a “prostitute”. She’s a victim and she deserves far better than she got from much of Australia’s media.

previous
Do you want to be a patron of FixedIt?
next
FixedIt: domestic violence is not romantic
Subscribe