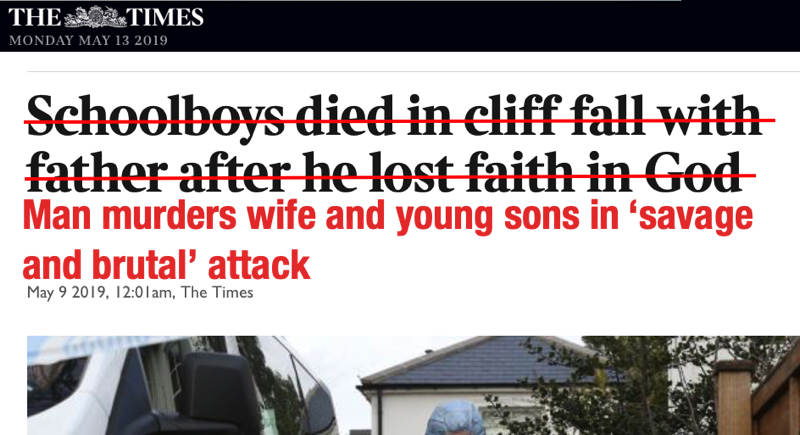 As many of you may know, I am almost finished writing the FixedIt book. Writing it has been incredibly difficult and I had to stop the FixedIt posts for a while. I’m not quite done yet but so many people sent me this headline, I just couldn’t ignore it.

Where to start? The murdered woman who didn’t even rate a mention in the headline? According to the BBC (who did a much better job of reporting on this) a coroner found that Adelino Gabriel Figueira de Faria stabbed his 47 year old wife, Laura Cecilia Navarrete De Figueira, 60 times. She had defensive wounds on her hands and fingers, indicating she fought back but was killed anyway.

After he killed his wife, Mr Figueira de Faria drugged their two young sons, ten year old Claudio and seven year old Joaquin, took them to a clifftop and either pushed them off or dragged them over the cliff with him.

The headline from The Times is unconscionable. The two little boys didn’t “die”, they were killed, as the coroner stated in her ruling.

Mr Figueira de Faria’s loss of faith may have been a painful experience for him but it has no relevance to the fact that he murdered a woman and two children. Lots of people have had crises of faith, they don’t murder women and children. When they do, their relationship with god is not an excuse or a reason to feel sympathy for a killer.

There is no ambiguity here, or concerns that we might not know what happened. The coroner made her ruling and there is no excuse for not making that clear in the article. Mr Figueira de Faria killed his wife Laura and their two children, Claudio and Joaquin. He is not the victim or the object of sympathy here, he’s the killer.

previous
FixedIt: there is no "sex" between priests and young boys
next
FixedIt: Domestic violence is not a "fight"
Subscribe