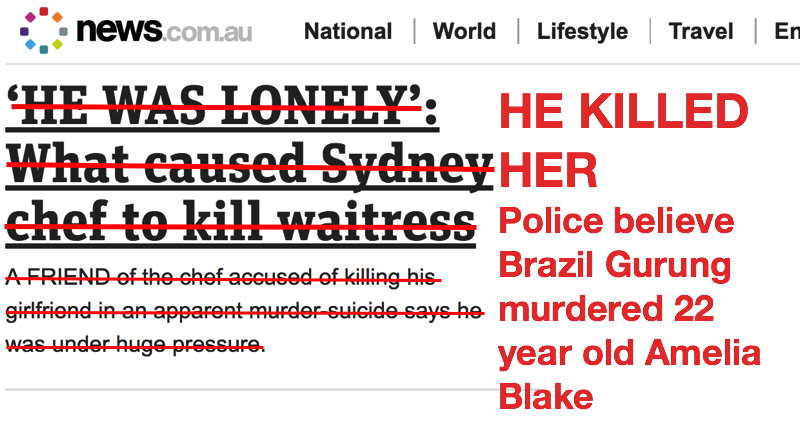 News.com.au have helpfully provided a perfect example of a how not to report on a man who killed a woman.

Don’t write headlines giving sympathy to a murderer. “He was lonely”. That’s the biggest, boldest fact to report? That’s the first thing to say in the headline? Really? He killed a woman. That doesn’t make him an object of sympathy. It makes him a murderer and a criminal.

Don’t interview a murderer’s friends. Men who murder women are not evil monsters lurking in alleyways, hiding their recognisably evil faces from the world. They’re just men. They look like other men and live lives like other men. They have friends and families and people who care about them. Those people mourn them when they die and are shocked when they kill women they claim to love. All these things are true of Brazil Gurung and none of them change the fact that he killed a woman. Murder is still murder even if the murderer had friends who liked him.

Don’t erase the victim. Amelia Blake was 22 years old. She was a person. She should have had decades to live and explore all her possible futures. In the whole article her name is used seven times and six of those are describing his life and his relationship to her. The only time she is mentioned outside  describing his life is in the last paragraph, which briefly states that her family is mourning her.

Women do not exist only as an extension of a man’s life. This is not a movie where the female character is written only to move the male protagonist through a plot. This is someone’s life. She was real. She was a person. And he killed her. Where are the people who mattered to her in this article? Where are her friends and the difficulties of her life? What are the trials she had to overcome? It appears that none of them are important enough to ask about or report. The only story told is his story.

Murder is the ultimate violation. It is unspeakably abhorrent that having suffered that violation Amelia Blake’s very humanity was then violated by sensationalised alleged journalism.