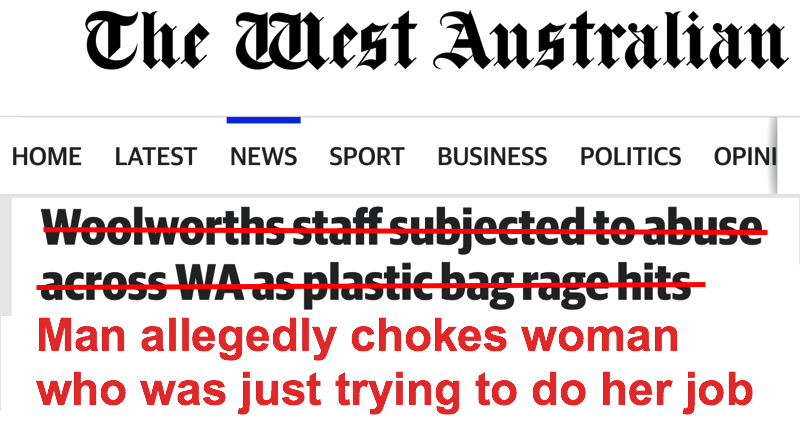 The West Australian reported that a man allegedly tried to choke a woman who works at Woolworths last Saturday in Mandurah.

The matter has been referred to police and it will be up to them to investigate the incident. This is not about his guilt or innocence, it’s about the way the alleged incident was described by The West Australian.

The article detailed a number of other incidents where customers had been abusive to staff after the ban on plastic bags, staff were called “money-grabbing scum” and had shopping thrown back at them.

This might sound a little odd to people who don’t understand why a heavily promoted change in the way we consume disposable plastics should be such a big deal. Those people may not have seen all the commentators on News Corp site whipping up anger over how the plastic bag ban is just a profit grab (CN: Miranda Devine), was “disgusting” (CN: Courier Mail) and of course,  will kill people (CN: Andrew Bolt).

After a week or two of this kind of rhetoric News was then shocked that men were getting violent with women in supermarkets and absolving the violent men themselves of all blame, they then presented choking a woman in her workplace as an entirely understandable outcome of asking people to bring bags for their shopping when they go to Woolies.

There is not ever an excuse for violence. Not even News Corp columnists. But inciting hatred and then expressing shock that hatred has manifested itself is at best, disingenuous.

previous
FixedIt: No adult can plan "sex" with a 2 year old
next
FixedIt: It's not "sex" when it's a crime