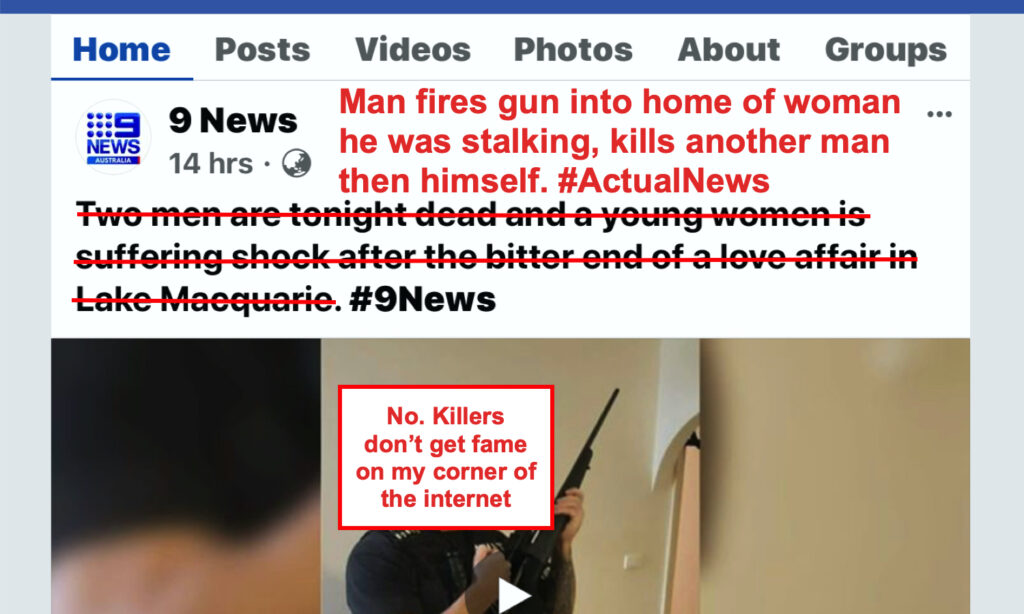 Channel 9 News reported on the man who stalked a woman, fired a gun into her home and killed a man, before killing himself. Oddly, not one of the main facts of the case made it into the lead on their Facebook post.

“Two men are tonight dead”? Apart from clumsy wording, how do you write a headline about a murderer, and group the killer with the victim as if they were in the same terrible accident? One man chose to kill. The other man did not choose to die. These two men were not the same.

9 News knew enough about the circumstances to label it a “bitter end of a love affair” (AKA “stalking”) but didn’t include any information about the stalking, so the focus remains on the sad rejected man, not the innocent man he killed or the innocent woman he terrorised. Then they amplified this with a video montage of photos of the killer posing with guns, showing off his tattoos and tough guy persona.

The report ended by offering the Lifeline website and phone number but did not include any information for victims of stalking or domestic abuse, such as 1800 RESPECT. Because the suffering of the man who’s crimes they did not mention is, once again, more important than the lives of the man he killed and the woman he terrorised.

Channel 9 News weren’t the only ones of course. I don’t usually bother with the Daily Mail because it’s like giving lots of attention to a mis-behaving toddler, but here’s a side-note on the phrase “jilted lover”: any time you see those words replace them with “violent man” and see if the sentence has the same meaning. Just saying.

previous
FixedIt: This woman didn't make any fatal errors
next
FixedIt: Why was he charged?
Subscribe