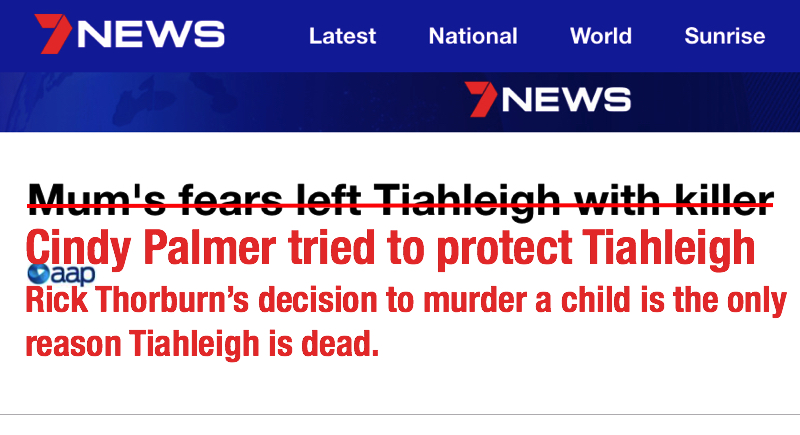 Cindy Palmer agreed to an interview with 60 Minutes, which was screened on Sunday night and widely reported on Monday. Yahoo 7 News was one of many outlets that picked up the AAP report.

Cindy is the mother of Tiahleigh Palmer, who was murdered by Rick Thorburn in 2015.

Cindy Palmer told 60 Minutes she had been blamed for Tiahleigh’s murder, despite Rick Thorburn confession and his guilty plea to the murder charge. She was blamed for putting Tiahleigh into foster care, as if she should have known or expected her child would be raped and murdered by carers in the foster system.

Anyone who thinks rape and murder is a genuine and reasonable expectation for any Australian child going into foster care, they have far more important things to do than send death threats to Cindy Palmer.

Cindy Palmer told 60 Minutes she put Tiahleigh into foster care because she was in genuine fear for her life and thought it was the only thing she could do to protect her daughter. Had she not taken that action and Tiahleigh or one of her other children had been killed by the man she was so afraid of, would Cindy Palmer would then have been blamed for not getting her children away from him? Probably. Women are often blamed for violence men choose to commit.

Blaming Cindy Palmer for the choices made by Rick Thorburn is just another twisted example of this. Cindy Palmer did not murder her child. She did not knowingly put her in danger, in fact she made a huge sacrifice to keep her safe.

Despite this, media coverage of the 60 Minutes interview is too often subtly supporting the idea that Cindy Palmer is somehow responsible for the choices made by Rick Thorburn and his family.

Other publications have been better at Giving Cindy Palmer a voice without blaming her for Rick Thorburn’s choice to murder her daughter: