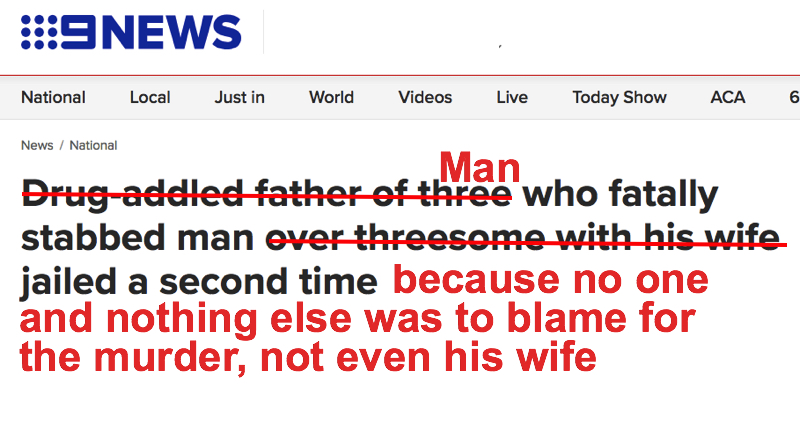 Channel 9 reported that Ryan Christopher Hawke was convicted of murder a second time for the 2014 fatal stabbing of Mark Colin Koller.

It’s almost impressive how many excuses and sympathy votes they managed to squish into a single headline.

“Drug addled” – so it wasn’t really his fault, the drugs made him do it

And then there’s this gem from the body of the article: “‘He was very annoyed someone had done this with his woman,’ prosecutor Sean O’Sullivan said during his opening address in November.”

I couldn’t get the transcript to check if Sean O’Sullivan really did say this  or if it’s just how the journalist heard it. Maybe there was intended irony that didn’t translate into text? I hope so because if someone who prosecutes murderers thinks about women in those terms, the women of WA should be very concerned.

None of this, however nauseating, is new or even unusual.

Former Our Watch CEO Mary Barry said about recent research on this, “There is a clear link between media reporting and community attitudes towards violence against women.”

“The way news media frame a story about violence against women can have a powerful impact on the way the public understands the issue. Who or what is selected to appear in the news and how those individuals and events are portrayed matters.

“Blaming victims for the violence inflicted upon them, for instance, still happens in one in six articles about violence against women. Not only are people never to blame for experiencing violence, in society these views impact how many people report violent incidents and conviction rates.”

Journalists have a responsibility to themselves, their profession, their readers and the victims of crime to report ethically on men’s violence against women. Sensationalising a young woman’s murder is not fulfilling that responsibility.