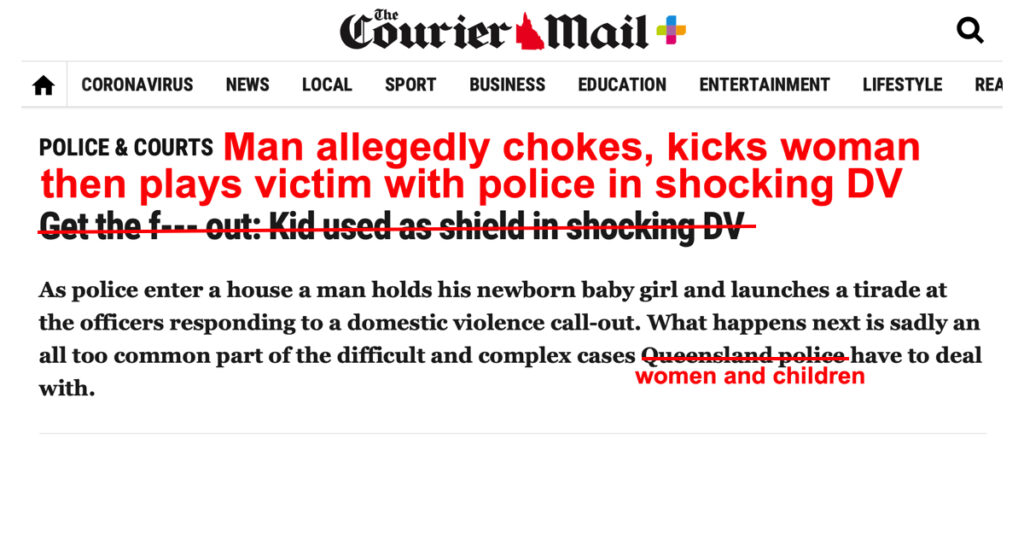 The Courier Mail reported an alleged domestic abuse story – well they sort of reported it. A man was charged with assault occasioning bodily harm and breaching a domestic violence order after a woman (who is the man’s partner) told police he had choked her and kicked her. When police went to arrest him, he was holding his baby daughter as he told them to “get the fuck out of my house”.

According to the article, “As the man continues the confrontation with police, he demands to know what domestic violence he has committed and says ‘typical word of mouth, male gets arrested’.”

The man in this story has not yet been tried and is entitled to the presumption of innocence.

The rest of the article is devoted to quotes from police about how difficult it is to do their job and how determined they are to make sure women and children are safe and the “perpetrator was held to account”.

Interesting timing for this piece.

In the last week more than 50,000 people signed a petition to have QLD police officer Neil Punchard fired after his conviction for giving a domestic abuse victim’s address to her abuser was set aside. The abuser, who was Punchard’s friend, had “threatened to kill his former wife and strap bombs to their children”.

QLD Police refused to accept liability for the breach and dragged the appeal process out for years until they were eventually forced to pay compensation to the woman who had to move her family twice in fear of her abuser.

A police whistleblower who assisted the victim says she was targeted for reprisals by the “old boy’s club” inside QLD police.

The Guardian reported that QLD Police pursed the case (despite Queensland Civil and Administrative Tribunal finding there “no real prospect” it would succeed) “because it was concerned about the implications of the initial ruling if applied to other data breaches”.

While this was going on, there was also Jacqui Barker’s case. She told 60 Minutes that her abuser threw petrol over her and then stood over her with a lighter. QLD police refused to prosecute him so she took out a private criminal case against him.

The 2015 Not Now, Not Ever report was critical of QLD police response to domestic abuse. “This included accounts of victim’s stories not being believed; police siding with the perpetrator; the situation being seen as either too complex or not warranting a police response due to property and child custody arrangements or lack thereof; or that the victim’s story of abuse was too trivial and a waste of police resources”. Follow up research by the University of Queensland found similar results.

Obviously not all police officers in QLD are like this. The woman who gave evidence against Punchard, despite knowing the risk to her career, is proof of that. She told The Guardian: “If I speak up maybe more good coppers can band together and make a change. The good old boys are slowly being weeded out. But if that culture is maintained then the new ones coming through will be no better. We need to have a culture where the good coppers band together.”

Rehabilitating QLD police reputation for failing domestic abuse victims isn’t going to happen with a puff piece in the Courier Mail. The only way it’s going to happen is if QLD Police, all of them, put the same effort into defending victims that they give to defending themselves.

(as always, if you’re reading this on social media, links are in the OP at www.patreon.com/JaneGilmore )

If you would like to know more about how and why the media’s erasure of men’s violence against women occurs, the Fixed It book is out now! Buy your copy here or at any good bookstore. Extracts available on why Fixed It started inThe Guardian, rape and other violence myths in The Age/Sydney Morning Herald and the Good Guy trope on my website.

previous
FixedIt: Report the actual story!
next
Fixed It: He's not the hero or the victim in this story