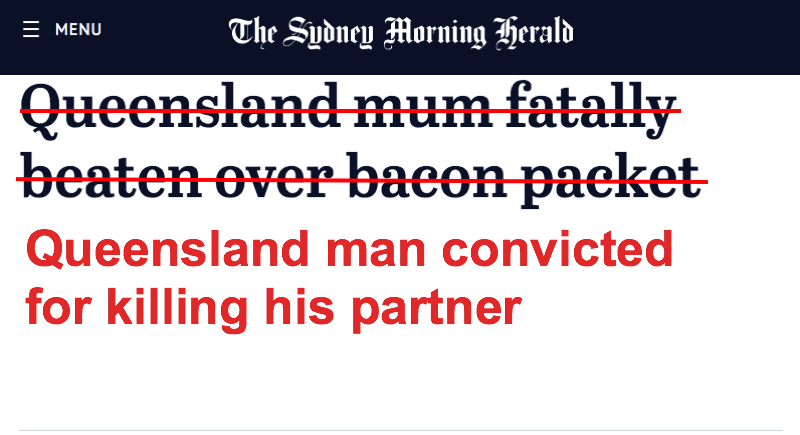 The Sydney Morning Herald reported that Graeme Colin Evans  was convicted of manslaughter after he beat his parter so severely her skull gave way under his fists. She died as a result of the injuries he inflicted on her.

The difference between murder and manslaughter is intent. Murder occurs when someone intends to kill another person. Manslaughter is where someone’s actions cause a death but the that was not the intention.

This conviction means Evans cannot be described as a murderer. He did, however, kill his partner and it was not a “row over a bacon packet”. He beat his partner so violently that she died. Despite this, he is invisible in this headline.

Invisible perpetrators are a constant in FixedIt. This is not a trivial issue. It matters because headlines are supposed to be a short summary of the article and when the article is about violence men commit against women and those men are invisible, the headline is not telling the story, it’s erasing the story.

Also, most people don’t consume news by reading a print newspaper from cover to cover. Only some people go directly to the home page of a news outlet. Most people get news links from social media, and the most likely source is Facebook. But regardless of the source, we see far more headlines than we click on.

previous
FixedIt: who are police looking for?
next
FixedIt: there's no such thing as "child prostitutes"