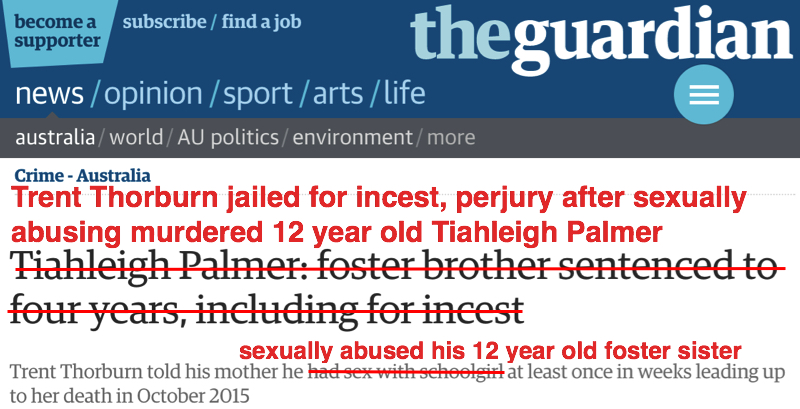 Trent Thorburn’s sexual abuse of Tiahleigh Palmer and her subsequent alleged murder have been widely covered in the Australian press.

Tiahleigh was 12 years old when her 18 year old foster brother committed the crime of incest against her, for which he pled guilty yesterday. He also pled guilty to perjury and pervert the course of justice and was sentenced to four years jail.

The Guardian reported that “Tiahleigh Palmer’s foster brother confessed to having sex with the 12-year-old”.

The Brisbane Times reported he was sentenced “after confessing to having sex with the 12-year-old”.

The ABC reported Thorburn “had sex with Queensland schoolgirl Tiahleigh Palmer before her alleged murder”.

The Australian reported “Thorburn had also admitted his sexual relationship with Tiahleigh in a Facebook Messenger conversation with his cousin”.

The Courier Mail reported “Trent Thorburn was 18 when he became sexually involved with his young foster sister”.

Yahoo 7 reported “he’d had a sexual encounter with 12-year-old Tiahleigh”.

Other variations of this reporting happened in The Daily Mail, The Queensland Times, News Mail, news.com.au and pretty much every other outlet around the country.

Tiahleigh was 12 years old, Trent Thorburn was an adult. There was no sexual relationship, encounter or involvement. She could not legally or morally give consent so it was not “sex”.

Legally, however, it also wasn’t rape. The criminal code in Queensland has no crime of rape in the list of sexual offences against children. Depending on the nature of the crime, the family relationship between them and the age of the victim, a person who rapes a child could be charged with “Carnal knowledge with or of children under 16“, “incest“, “Indecent treatment of children under 16” or the staggeringly named crime “Maintaining a sexual relationship with a child“.

Thorburn wasn’t convicted of rape so calling him a rapist would be incorrect and possibly defamatory.

Court reporters are also required to report on what is said in court, not what they think about the evidence presented. So if Thorburn, his lawyer, the prosecutor, the judge, or any witness described the incest as a “sexual relationship” that quote could appear in the media reports.

Where it gets murky is in reporting on evidence that is described rather than directly quoted, as occurred with all the examples above. In the same way that perpetrators convicted of rape are often described as having “sexually assaulted” their victims, Thorburn’s crimes against Tiahleigh could have been described as “sexual abuse” rather than sex, if they could not use the legally accurate term incest.

All the articles about Thorburn’s conviction identified the charge of incest and reported the crime as “sex”. They endorsed the perpetrator’s view of his crime rather than defining it as what it really was – unconscionable sexual abuse of a vulnerable child by an adult who absolutely should have known better.

Children cannot have sex with adults. Sex requires consent and children, by definition, cannot give consent, so it’s not sex. It’s child abuse, it’s sexual abuse, it’s any number of terms that accurately describe a crime. An act perpetrated on an innocent victim, someone who was unable to defend themselves from the violence done to them, and who suffered terribly because of an adult’s choice to commit that violence.

That word choice is the key. Sex is a choice made by every person involved. Rape and sexual abuse are a choice made only by the perpetrator. The victim has no choices.

Sexual abuse of children is a horrific concept, we should feel a natural revulsion at the very idea. But we can’t protect vulnerable children or deter predators by diminishing the reality of sexual abuse. And we further damage survivors with the implication that the crimes committed against them are something less than a horrific and violent crime.

There are far, far too many of those victims. You could fill the MCG eight times over with the number of children living in Australia, right now, who have been or will be sexually abused. You could empty out Brisbane and entirely refill it with adults who have suffered sexual violence in their lifetime. All these people see headlines and read article and are affected by how such crimes are reported.