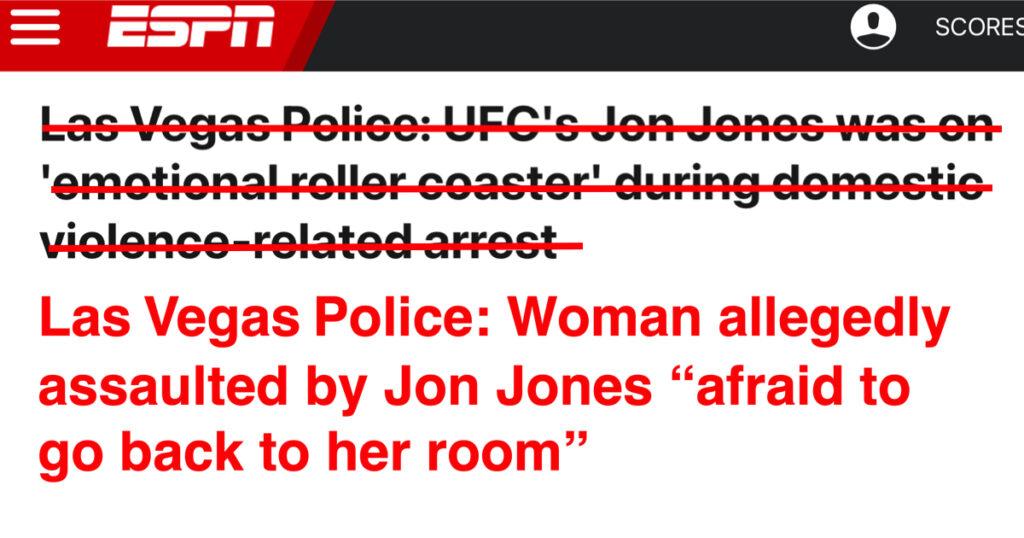 ESPN reported that UFC fighter Jon Jones was arrested on charges of injuring or tampering with a vehicle (a felony) and misdemeanour battery domestic violence.

Jones has not yet been tried in court and he denies the allegations.

This post is not about whether or not he is guilty, that is for the court to decide. It’s about how the story is framed. The original headline erases the alleged victim and focuses on the “emotional rollercoaster” of the man charged with assaulting a woman.

Her fear and injuries were included in the police report and in the article itself, as was her reluctance to give a statement to police. They were however, erased from the headline.

As is too common in reports about violence committed by professional sportsmen, the man accused of inflicting the violence was depicted as the victim, not the woman who was allegedly hurt and intimidated.

His emotions are the story, not his choices.

When this framing of men’s violence abasing women is a pattern, not an exception, it reinforces the myth that violent men are helpless victims of their own emotions and are not responsible for their choices. It’s sexist, demeaning, ill-informed and inaccurate. Even sports journalism should be better than this.

previous
FixedIt: stalking is not a comedy headline
next
FixedIt: Sexually exploiting a child is not a "relationship"
Subscribe