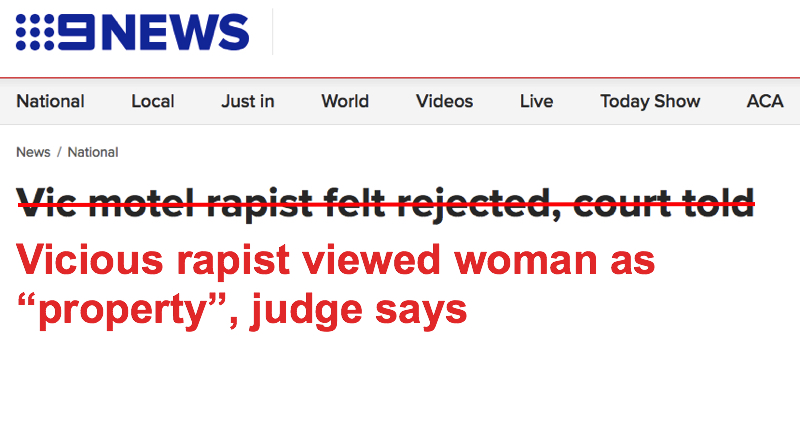 Channel 9 new reported Darin Wheeldon, 42, was convicted on four counts of rape and one charge each of false imprisonment, intentionally causing injury and theft, after he kidnapped a woman and held her prisoner for a terrifying three day ordeal.

He whipped her, raped her multiple times, assaulted her and left her bound and gagged in a motel wardrobe.

The article says the judge in the case refused to accept that his “feelings of rejection” were relevant.

“It’s nothing more basic than he thought she was property and he could deal with her as he wanted. Why shouldn’t I take that view?” she asked.

Despite this, for some incomprehensible reason, Channel 9 decided to headline the article with an excuse for a man who committed rape, kidnapping and torture.

The report was an AAP report which was also picked up by the Herald Sun. While the Herald Sun also put the article under a headline sympathetic to the rapist, they did at least include AAP’s report about the victim:

“I felt defiled, violated and helpless,” she said in her victim impact statement during Wheeldon’s earlier pre-sentence hearing.

But she said her spirit remains unbroken.

“I will never forget the pain and hurt you caused me,” she said.

“But I forgive you for my own sake, so I can move on.

“I pray I will never see you again, and I will build my life back to what it was.”

Channel 9, in another incomprehensible decision, removed the victim report from their article, which was centred on the sensationalised aspects of the horrific crimes Wheeldon committed and the excuses made for him by his lawyers.

If anyone ever wanted an example of everything media should NOT do when reporting rape, this is pretty much it.