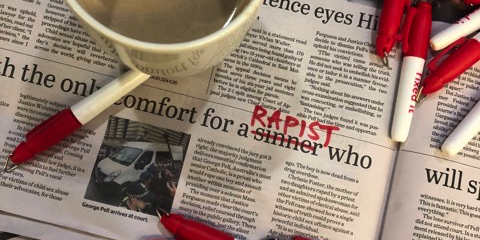 It’s book launch day. A few weeks shy of four years since the first Fixed It went out and tonight I’m launching the bookI never expected to write. It seems like the right time to think about how I got here and where I go next.

That first fixwas not planned. It was born out of a moment of frustration and anger. The response was a surprise and everything that’s happened since then continues to surprise me. I’ve learned far more than I ever understood there was to know back then. Fixed It has made me a better writer, a better feminist, a better ally, a better journalist and a better person. It’s also taught me how much more there is to learn.

Four years of intensive education, both formal and informal, has changed me, my work and my future. It has both honed my anger and diffused it. At the beginning I was angry about things I didn’t understand, which made my anger and its target simple. Now, my anger is much more complex, as are the things that make me angry. I think that’s where my future lies, in untangling the complexities of anger, and of men’s violence and women’s oppression.

Having said that, Fixed It is not done. While I can definitely see improvements in the way the media reports (or fails to report) on women’s lives and men’s violence, there’s still a long way to go. I may not be able to do the daily fixes I used to do before I realised the cost of immersing myself in the everyday shocks of this work, but I also know I cannot walk away from it. I cannot see headlines that blame victims or excuse perpetrators and dismiss them as part of my past. As long as they continue to happen they are my present, hard coded into the way I see the world and the power everyone has to change it.

A certain hard-nosed pragmatism is one of the many things I have learned over the last four years. There is the world as I wish it could be and the world as it actually is. The space in between is where I, and so many others, do the work we do to try to bridge that gap. And inside that gap is rising homelessness, increasing polarisation and decreasing resources for changemakers. Lesson learned: give up that extra drink, the lazy uber eats, the snazzy new lipstick and throw a little money at the people I want to be giving their all to the space between what is and what should be.

This is not a small thing. Some of you may have read the piece I wrote for Meanjinlast year about how close I was to homelessness and the privilege I have that saved me. My life has become easier since then, but the sheer terror of those years could easily have overwhelmed my anger about the world outside my small corner of it. One of the things that kept me grounded (and fed) through that was the Patreon supporters(in case you haven’t heard of it, Patreon, is a crowd funding platform for writers, activists, artists and creators).

I was at the Melbourne Writer’s Festival for a little coffee and conversation event on Saturday, where Catherine Deveny and I were talking about the book. She reminded everyone there how important it is to support writers and activists whose work you believe in. It took me a bit by surprise because I just assumed everyone knew that most authors and freelance journalists are struggling to cobble together an almost living wage. The foolishness of making assumptions at an event for the book I just wrote about how damaging unquestioned assumptions can be was not lost on me.

As I sit here now, hours away from the official launch of the Fixed It book, I am mostly trying to stop anticipation from morphing into full blown panic. Imposter syndrome is strong but what I have been given is stronger.  So, here I am, thinking about past, present and future. About anger and aspiration. About what to do next and how to pay for it. About the price I will pay and what I will be given in return. In a storm of conflicting feelings, the strongest emotion I feel is gratitude. Gratitude to the people who supported me, taught me, argued with me, raged with me, laughed with me and believed in me.

It seems like the right time to say thank you. Too many names to list and no sensible order I could put them in, so all I have is thank you. Just, thank you.

previous
Fixed It: Alleged violent perpetrator's excuses are not the headline
next
FixedIt: He's a rapist