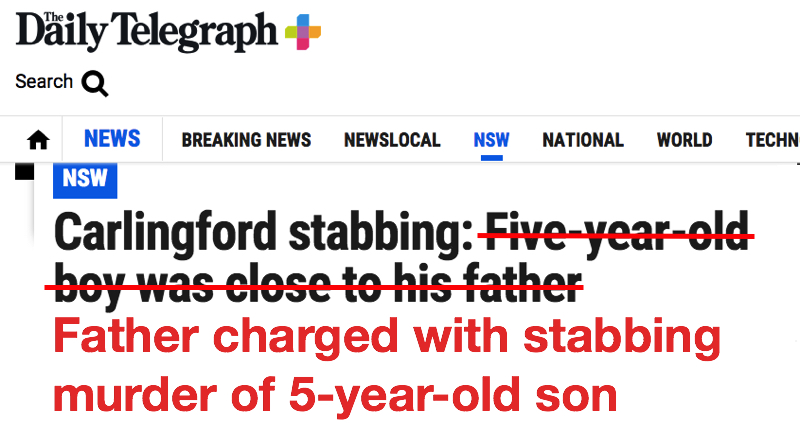 Last Friday a five-year-old boy was brutally stabbed and later died in hospital. The stabbing occurred in the family home and his 36-year-old father was charged with his murder.

It’s too early to know circumstances and background of the murder and the father’s guilt or innocence will be determined by the court, not the media. Given that, it is as inaccurate and dangerous to describe him as a “loving father” as it would be to describe him as a “brutal child killer”. Despite this, a few outlets couldn’t let go of the Good Man Who Kills People He Loves narrative.

The ABC devoted nearly a quarter of their report on the murder to commentary from neighbours about the man accused of murdering his son.

“He said the father was “an easygoing Aussie bloke” and they would occasionally share beers and talk about cars and the footy.”

“He also described him as a doting father’.

‘It’s shocking,’ he said. ‘He cared for that boy and held him and nursed him.'”

The Australian, in an otherwise responsible report on the murder, also reported that a neighbour “said the boy’s father was a lovely man who doted on his son”.

News.com.au also reported on comments from neighbours: “‘He cared for that boy, he was very patient with that boy and he held him and nursed him like he would his son. I can’t imagine,’ Hank said.”

“The relationship between the father and the son next door was a doting relationship. He cared for that boy, you could see the boy run to the dad when he needed help.”

The Daily Telegraph led with the loving father narrative: “Neighbours of a five-year-old boy who died after being stabbed in his Carlingford home this morning said he was a “bold”, “charming” and “happy” boy who enjoyed a close relationship with his father.”

If he is guilty, he is not a “loving father”, he’s a man who stabbed his own child to death, taking an entire life and future from a child who deserved his love and protection, and leaving the boy’s mother and family dealing with unending horror.

If he is innocent, he’s not a child killer, he’s a man who has suffered unimaginable loss and the additional trauma of being accused of a horrific crime he didn’t commit.

It is worth noting that many other news outlets reported on this murder and even included quotes from neighbours without valorising the man accused of murdering his own son. The Guardian, The Sydney Morning Herald, Channel 9 news, Buzzfeed, The New Daily and 7 News all reported the murder and included quotes from police and others to give context. None of them reported the accused as a “loving father”. They almost all reported NSW Police Superintendent Rob Critchlow saying, “The level of violence is horrendous. A young boy has died from being injured in his home. It’s probably about as bad as it gets, really.”

They also described the boy’s grandmother and her efforts to save his life. “She’s behaved in a heroic and caring manner, as you would imagine a grandmother would. She’s been presented with something terrible, and done her best to get the young boy to safety.”

Most of the journalists who reported the story did it as well as they could report such an incomprehensible crime.

After the Margaret River murders Media Watch ran a segment challenging the “Good Bloke” narrative that so often dominates reporting of men who murder women and children in their family. The transcript is well worth reading in full, but there are a few things that stand out. Robert Ovadia, who defended the “Good Bloke” narrative was quoted as saying: “Nobody thinks he’s a good bloke after the fact. Surely that’s implicit – surely? … why should we be afraid to report what people thought of him before? It’s accurate.”

Margaret Simons, Walkley-award winning journalist and academic, rebutted this by saying “The nature of family violence is that it is hidden. Friends, neighbours and colleagues therefore do not necessarily know about it, and their testimony is of limited use and meaning.”

We don’t know yet if this murder was part of a pattern of family violence. Channel 9 report that the man accused of killing his son had tried to seek help for mental health issues several times in the week before the murder. It’s too early to tell if this is relevant to the murder but it’s certainly a sign that something is seriously wrong with the mental health system. Most mental illnesses do not cause violence, in fact people with mental illness are more likely to be victims than perpetrators of violence. But in some rare instances it can be a factor. It is far too early to know if that was the case here but it does not change the point that a man accused of murdering his own child should not be valorised as a “doting father”.

In addition to the effects on the immediate family, reporting this murder as something that allegedly happened between a loving father and his little boy is dangerous, stupid and insulting to every man who genuinely is a loving father. Fathers who love their sons do not stab them to death. Loving fathers would find the very thought of such an action utterly sickening. Fathers who are close to their children would suffer any hurt imaginable to protect those children from harm. This is something any father who loves his children instinctively understands.

The man accused of killing his own son does not.