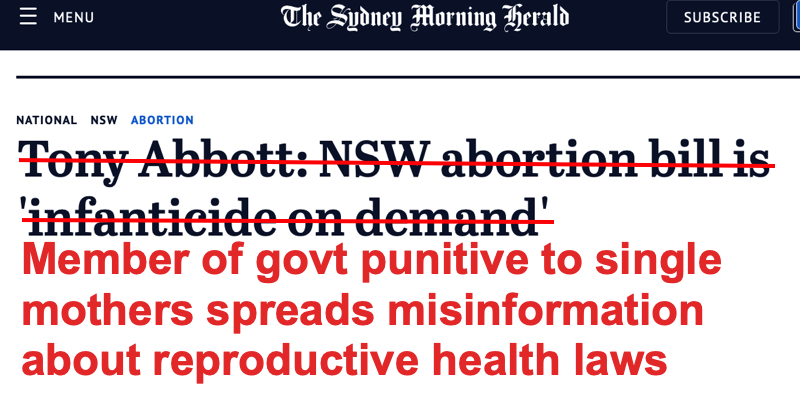 Tony Abbott was one of several politicians using their tax payer funded position to spread misinformation about reproductive health rights.

Abortion is not infanticide.

Infanticide is defined in Australia as “killing a child under one year of age”. A foetus is not a child. Safe, informed, legatos reproductive health is not sex selection or slavery (yes Abbott really went there) it is simply allowing women to manage their health and bodies as they see fit, not as dictated by men.

It’s also worth noting that Abbott is a member, once a leader, of a government that takes a deeply punitive approach to single mothers, because looking after children after they’re born is not something they support. Controlling women’s ability to avoid having children they don’t want or can’t care for is the thing that matters to men who have never been at risk of such an thing.

Journalists obviously need to report what was said in public debates about legislation, but context matters.

Criminalising abortion does not stop women terminating pregnancies, it just means they can do so safely.

Men who have no risk of getting pregnant do not have the right to make laws that restrict women’s access to self determination or medical care.

If you cannot get pregnant your only role in any debate about reproductive health care is to sit down, shut up and listen respectfully to the people who are directly affected by it and have information to share.