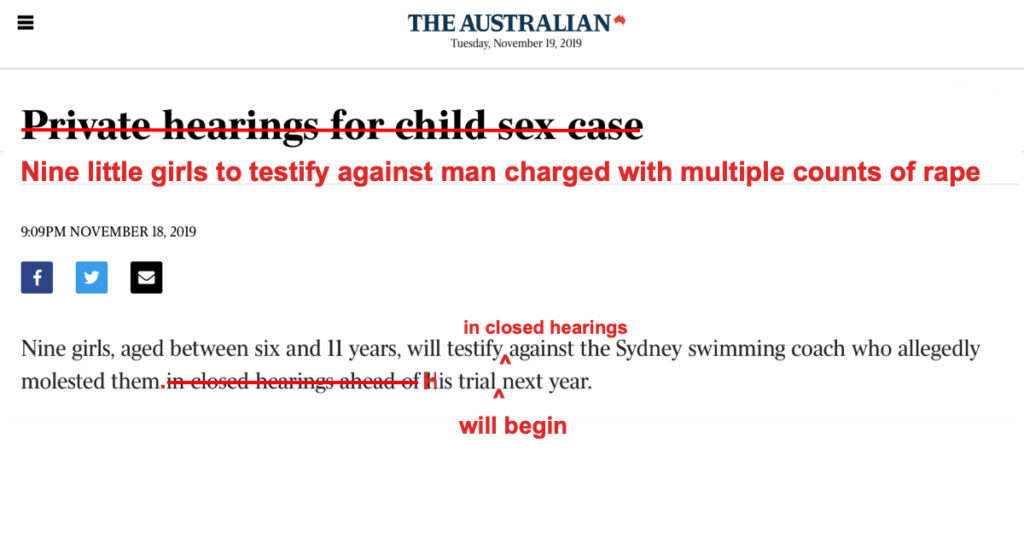 The Australian reported that the alleged victims of rape and sexual abuse by 21 year man are going to give evidence in closed hearings ahead of his trial next year.

Firstly, this case has nothing to do with sex, it’s about allegations that a man raped and sexually abused nine little girls. Secondly, erasing the alleged perpetrator from the headline of the story is failing to tell readers what the story really is and who is responsible for an alleged crime of child abuse.

To be clear, this man has not been tried on these charges. He is entitled to the presumption of innocence and therefore this commentary is not about his guilt or innocence, it is specifically and only about the way the charges against him are described by the media. Given his right to a presumption of innocence and the vital importance of not identifying any of the alleged victims, I have chosen to not name him or the venue where the abuse allegedly occurred.

“Child sex” is not a thing. Children cannot have “sex”. Sex requires consent, children cannot legally or morally give consent so it is not “sex”. Rape, sexual abuse and sex are not the same thing and they can not be used interchangeably in headlines.

previous
FixedIt: sexual abuse and sex are not the same thing
next
FixedIt: Why did he murder her?
Subscribe