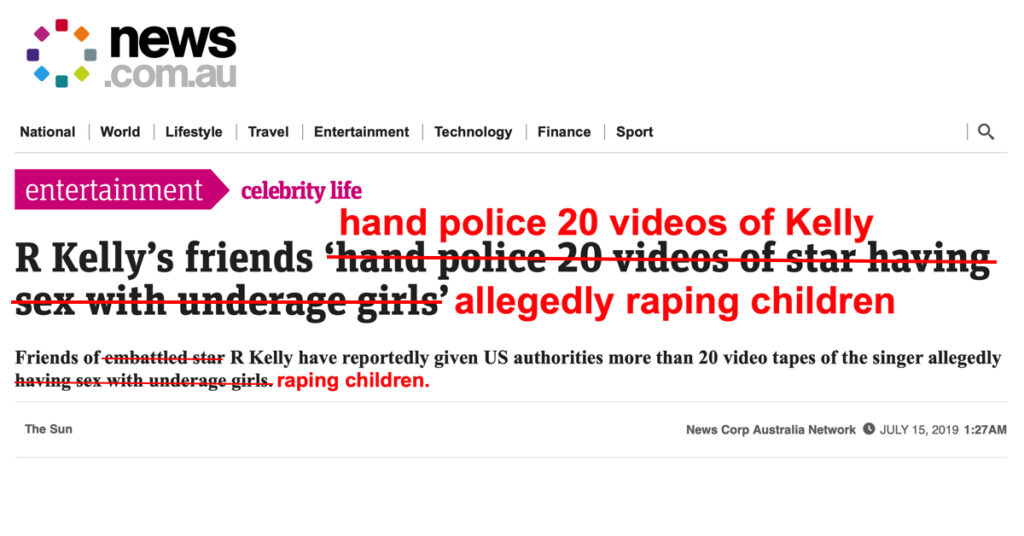 News.com.au republished a report from UK paper The Sun in which both publications claim his friends gave police videos of Kelly “having sex with underage girls”.

To be clear, Kelly has not yet be tried. This commentary is not about his guilty or innocence, which can only be determined by the court. This post is solely about the way the charges against him were reported in the media.

The phrase “underage girls” is frequently used to describe the victims of rape (or alleged rape). It’s only ever used in that context. No one ever says “underage girls were playing football at the park” or “my underage girls are watching Finding Nemo”. In those circumstances they’re children and they’re described as such.

When someone is accused of committing sexual violence against them, they cease to be children and become “underage girls”. Why? Because “girls” are sexual and “children” are not? Because the media wants to make the alleged crime less shocking and more titillating? There may be another explanation – I very much hope there is – but it’s difficult to think of one.

Raping children is not a salacious crime, it’s a horrific abuse of power and trust. It does not need euphemisms and it should never be sensationalised.

The fact that Kelly has not been convicted of these charges has no bearing on the way they are described in the media. Grooming children, sexually abusing them and raping them are crimes. If someone has been charged but not convicted they are alleged crimes. But whether they are alleged or proven, there is no excuse for confusing romantic sexual relationships with child sexual abuse. Using those terms as if they are interchangeable implicitly blames victims of predators by suggesting they participated in the abuse. A 12 year old child cannot participate in the choice to abuse her.

previous
FixedIt: He didn't rape cabs and attempted rape is not "sex"
next
FixedIt: What did the court hear?
Subscribe