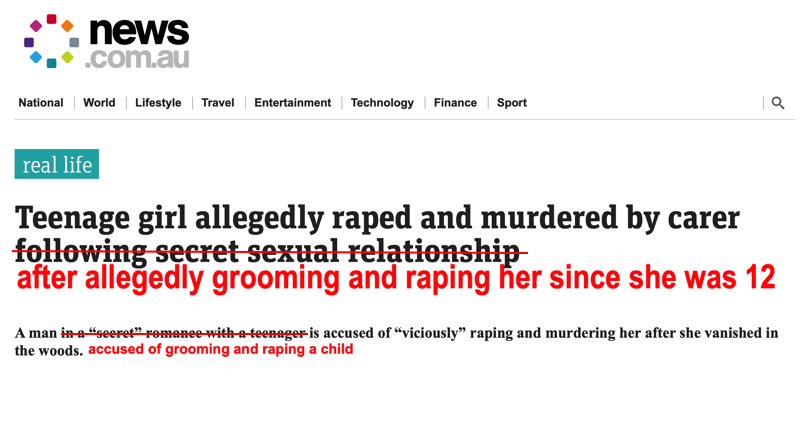 News.com.au reported on a trial in the UK in which they described an adult man’s alleged grooming of a child he is accused of raping and murdering as a “secret sexual relationship”. They then doubled down and called it a “secret romance” in the lead paragraph.

To be clear, the man is still on trial for rape and murder of 13 year old Lucy McHugh and he denies all charges against him. This commentary is not about his guilty or innocence, which can only be determined by the court. This post is solely about the way the charges against him were reported in the media.

Stephen Nicholson is on trial for rape and murder after police allege he stabbed Lucy repeatedly in the neck and upper body.

The prosecution also alleges Nicholson had been raping and sexually abusing Lucy since she was 12 years old. Nicholson denies the allegations and insists her diary entries describing the alleged rapes and grooming were fantasies.

An adult man cannot be in a “secret relationship” with a child of 12. He cannot have a “romance” with a child and it cannot be described as a “sexual relationship”. If the allegations made by the prosecution are found to be true then it is rape and grooming, not romance. There is nothing romantic about raping children.

The fact that Nicholson has not been convicted of these charges has no bearing on the way they are described in the media. Secret romances are not crimes. Grooming children, sexually abusing them, raping them and murdering them are crimes. If someone has been charged but not convicted they are alleged crimes. But whether they are alleged or proven, there is no excuse for confusing romantic sexual relationships with child sexual abuse. Using those terms as if they are interchangeable implicitly blames victims of predators by suggesting they participated in the abuse. A 12 year old child cannot participate in the choice to abuse her.

previous
FixedIt: Who was charged with rape and torture?
next
FixedIt: He didn't rape cabs and attempted rape is not "sex"