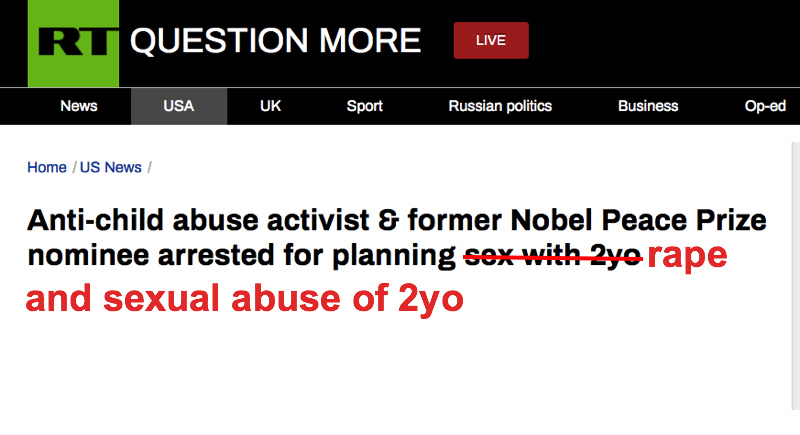 RT.com reported that Joel Davis, “co-founder of a sexual violence awareness group, who was nominated for the Nobel Peace Prize in 2015, has been arrested on charges of child pornography and attempting to sexually exploit children as young as two years old.”

Davis was arrested in New York after exchanging “text messages with undercover law enforcement officers for several weeks in June, in which he stated that he was sexually interested in children of all ages (“0+”) and sent the officers sexually explicit photographs of infants and toddlers, including photographs in which they were engaged in sexual activity with adults. He also discussed his intention to engage in sexual activity with the nine-year-old daughter of the undercover officer and with the purported two-year-old daughter of the undercover officer’s girlfriend.”

It will be up to the court to determine whether or not he is guilty of the crimes with which he is charged. This commentary is not about his guilt or innocence, it is about how the charges against him are described in the media.

Two year old cannot have “sex”. It is ludicrous and abhorrent to describe any attempt to abuse a child so young as “sex”.

Sex requires consent, children cannot legally or morally give consent so it is not sex. Rape, sexual abuse and sex are not the same thing and they can not be used interchangeably in headlines.