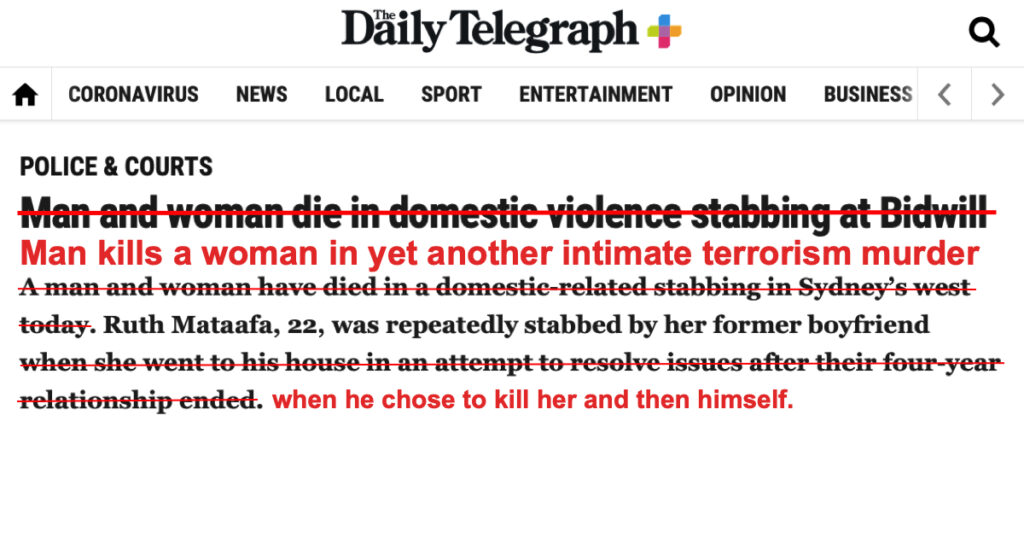 All links and screenshots are in the OP on Patreon (no paywall) if you’re reading this on a social media share and can’t see them.

The Daily Telegraph was one of many media outlets that reported on the horrific murder of Ruth Mataafa by erasing the man who chose to kill her – Jaciah Fuimaono – and reporting that the two of them “died”.

Dying is not the same as being killed. Dying is tragic, killing someone is a horrific choice and a crime. Ruth Mataafa didn’t “die” with Jaciah Fuimaono, she was killed by him. She didn’t choose to die, he chose to kill her. This is another case of intimate terrorism.

This headline makes it seem that they are both innocent victims. They’re not. Ruth is, without doubt, but Jaciah Fuimaono is not a victim, he’s a killer.

The police have a role in this too. A number of articles quoted Detective Chief Inspector Paul Tickner from the Mount Druitt area command. From the SMH: “police believed the pair were in a relationship but had split up recently and were trying to get back together on Saturday. ‘That seems to be what the underlying cause was of this morning’s situation,’ Chief Inspector Tickner said.”

Thousands upon thousands of couples break up every year. Break ups do not cause murder. A violent man’s choice to kill a woman is the only thing that causes murder.

I used the headline from The Tele for the fix because it was the first one that came up in my google alerts this morning. But every other mainstream publication in Australia reported this murder the same way.

As Sally Rugg pointed out on Twitter, The Sydney Morning Herald published a headline, lede and share-module content using the quote from Chief Inspector Tickner describing it as “a tragic loss of life”. The share module (the headline that comes up when you share the post on social media read “Man and woman, both 22, die in ‘tragic” double stabbing“. The lede (first paragraph of the article) read: “A man and a woman in their 20s have died after a double stabbing in Sydney’s west on Saturday“.

These are the headlines in the other mainstream news outlets this morning. Each article stated that police said Jaciah Fuimaono killed Ruth Mataafa then himself, so this was not case of reporting before the details were available.

I’ve included screenshots because some of them are changing as public responses on social media are reminding editors and sub-editors that a man who kills a woman and then himself is notthe same thing as two people dying. Clearly, they needed this reminder.

The ABC: Two dead after stabbing in Western Sydney

According to the information collected by Destroy the Joint’s Counting Dead Women project, 23 women have been killed so far this year in Australia. The media has a responsibility to report these murders and the context with integrity. They collectively failed to do that today.