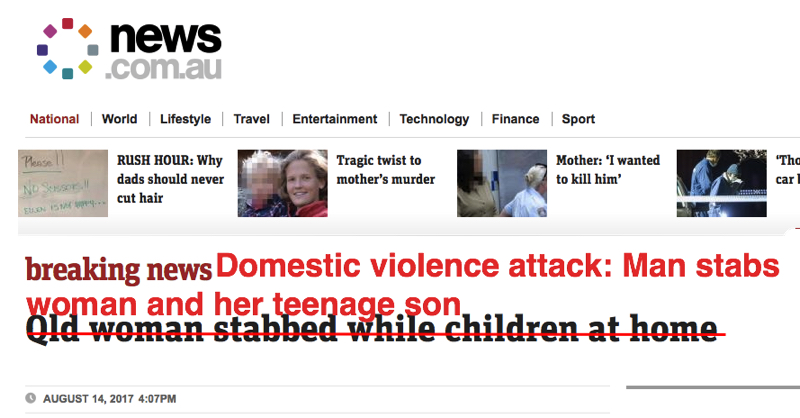 A man stabbed a woman 37 times, then attacked her 18 year old son. But he doesn’t rate a mention in the headline by news.com.au.

And call it what it is, another domestic violence attack. This woman was not attacked by a knife, she was stabbed by her partner.

Once again, the man who committed the violence is invisible, erased from the understanding of the readers, his choices and actions not are not recognised.

The article itself is actually a cut above the usual reporting of such attacks. It covers the facts of the case and explains the wider context of increasingly violent attacks by men against women and children.

The man’s death is recorded, but there’s none of the “but he was such a good guy” commentary so common in these cases and he’s not referred to as a “good dad” or a “troubled man”, he’s just a man who stabbed a woman and a teenager.

But violent men should not be erased from the headlines, the should be the subject of the article, not the object, and certainly not the invisible factor.

It’s worth revisiting Jackson Katz’ excellent TED talk on how and why this matters.

John stabbed Mary – Active voice: John is the subject, stabbed is the verb, Mary is the object

Mary was stabbed by John – Passive voice: Mary is now the focus, not John, he’s dropped back to the end of the sentence.

Mary was stabbed – John has disappeared completely, all that’s left is Mary. She is the subject and the focus, so instead of thinking about his actions and his choices, we are left to wonder about hers. It’s implicit victim blaming.

Victims are never to blame for the violence committed against them. there is only one thing that causes violence and that is the choice to do it and the person who made that choice.

previous
Article: Is video footage of your sexual assault what it takes to get justice?
next
Article: Single women face a frightening future of homelessness in Australia
Subscribe