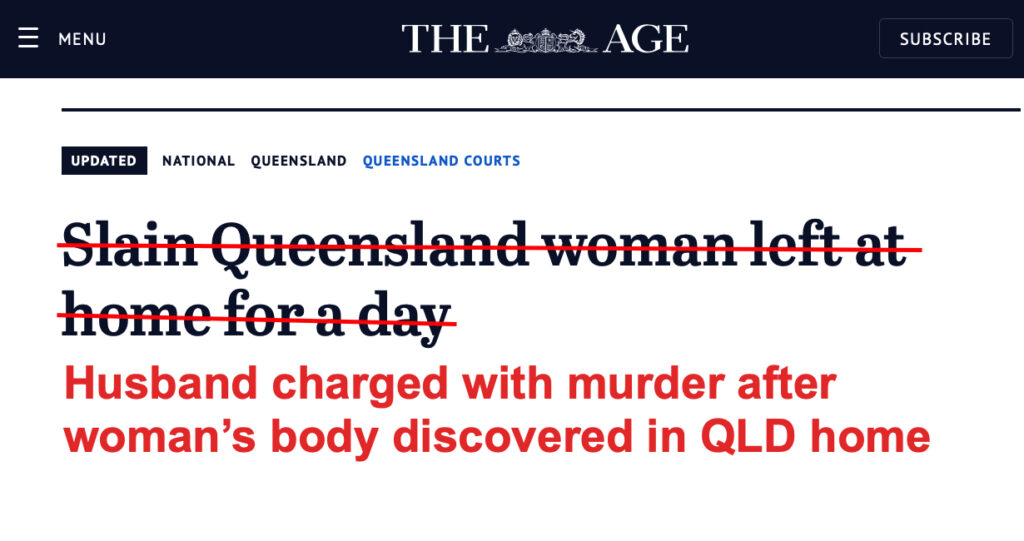 The Age reported that a man has been charged with murder after his wife’s body was discovered in a home in Queensland last week. Although, you wouldn’t know that from this headline.

The fact that her body was not discovered until a day later is relevant but it’s not even close to being the main point of the story, which is that another woman is dead and her husband has been charged with her murder.

To be clear, the man has not yet been tried and he is entitled to the presumption of innocence. Only the court can determine whether he is guilty or not guilty. This commentary is not speculating on his guilt or innocence, it is specifically and only about how men’s violence against women is reported in the media.

This is how men’s violence against women is erased from media reporting. Most people see a lot more headlines than full articles, so if you’re just scrolling through a social media feed or even the website of a news outlet and all you see is a headline about a woman’s body being left undiscovered for a day, you don’t know the context or the most important point of the story, which is that her husband has been charged with her murder.

The longer title for FixedIt is ‘invisible perpetrators and blameable victims in the media’. This one and the earlier one from today are perfect examples of how it got that name.

previous
FixedIt: why was he in court?
next
FixedIt: Britney Watson was a person not a wheelie bin
Subscribe