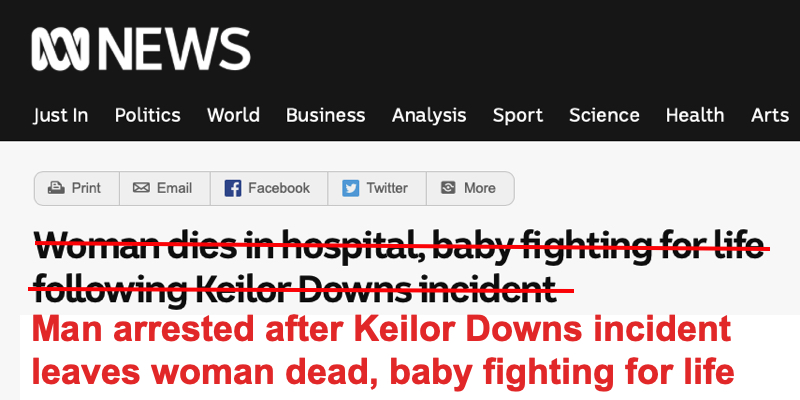 The ABC reported that a man was arrested after what police believe was an assault on a pregnant woman that started in a home in Kiwi Retreat and continued in a car trip that ended when the woman suffered life threatening injuries as she exited the vehicle while it was still moving. She died in hospital and her baby is in critical condition after an emergency cesarean section.

The problem though, is that the ABC didn’t include the arrest in the headline.

There’s a lot of information not yet available about the alleged assault. Police have not released details about how or why she left the moving car, or what relationship existed between the man and the dead woman. Speculating about what happened is not just pointless, it’s dangerous. A man was arrested, which means this case is already sub judice (before a judge) and anyone publishing anything that could prejudice the trial would be in contempt of court. As would any suggestions regarding the man’s guilt or innocence before it has been tested in court.

One essential fact that can and should be reported however, is that police believe there was an assault and a man has been arrested. This is not speculation or opinion. It is a fact reported by Victoria Police and it is highly relevant to any media reporting on the incident.

“Incident” feels like a weak word to use about an event that ended with a pregnant woman dead and a baby in critical condition. It’s understandable that people want a more forceful or descriptive word to help them make sense of what happened. At this stage of the investigation, however, there really is no other word to use that does not risk prejudicing the investigation and potential trial.

Reporting on highly emotive events, like the death of a pregnant woman, is difficult, particularly in the early stages of the investigation. People are rightly shocked and want to know how such a thing could happen but journalists cannot satisfy public curiosity with irresponsible reporting.

There is however, a difference between being careful about sub judice contempt and erasing alleged perpetrators of violence. It’s a simple matter of including all the relevant facts and it shouldn’t be this difficult to do.

previous
FixedIt: Annabelle Chen was a person
next
FixedIt: What was he jailed for?