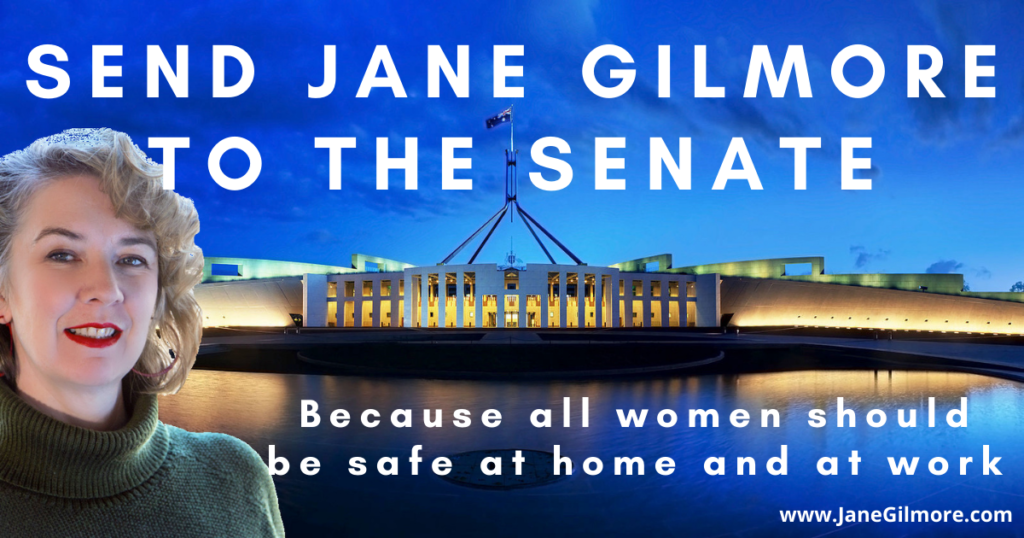 The Senate is the house of review. It’s where new legislation is checked for flaws, unintended consequences, and missed opportunities. That review needs more people asking about the effect every law will have on women, children and non-binary people, rather than seeing the world through a straight, white, wealthy man lens.

I will be one of those people and I will work with the people already in the Senate who do the same.

We have been fighting for women’s rights and gender equity for over 100 years, and we’ve come a long way since the days when women weren’t allowed to vote or run for parliament or sit on juries. But the fight isn’t over. The issues that will dominate this election, and more importantly the years of governing afterwards, are crucial for women.

The current low unemployment rate is mostly due to the locked borders that keep international students and migrant workers out of the jobs market. When those borders open again, the market will change. At the beginning of the pandemic women lost more paid work, did more unpaid work, and were given less government support than men.

Women’s work is still undervalued and underpaid, which puts us back on the front line of the next shockwave. We need parliament to recognise this and act on job security, wages, and conditions to protect vulnerable workers from exploitation by large corporations who underpay the majority of their workers so they can overpay the minority.

We need to make sure businesses are unafraid of hiring women and very afraid of exploiting them.

Women’s safety is not a public relations problem. It’s a structural matter that needs a new response, not just a more announcements about more spending on things that don’t work.

Crisis assistance to help desperate women fleeing violent men is necessary. But it doesn’t change the source of the problem.

We need significant investment in primary prevention that works right now, as well as working for the future. We need long-term programs to change men who are already violent as much as we need education for the men of the future.

We need targeted prevention programs for men who prey on women with disabilities, migrant women, and single mothers. We need education that teaches vulnerable girls and women to recognise the early signs of controlling behaviour and know how to respond. We need crisis response beyond and outside police because police are too often part of the problem instead of being the solution.

Elections are always about economics and there is a strong economic case for spending on violence prevention. Five years ago KPMG estimated the cost of men’s violence against women and children was $22 billion dollars a year. The 2021 federal budget promised $1.1 billion investment in women’s safety and this is not $1.1B per year, it’s spread across different programs of varying duration, most of them two to three years.

We could increase the government’s current promises tenfold and still be only outlaying half what men’s violence costs the economy each year.

The pandemic pealed back all the meaningless promises papering over the cracks in aged and disability care. Both sectors are desperately underfunded and poorly managed. This is a health issue, a human rights issue, and a gender issue.

Two thirds of people in aged care are women. Nearly 85 percent of aged care workers are women. Women and girls are half the disability population, only 37 percent of NDIS participants, and 70 percent of the disability workforce. Governments have known since the baby boom that this boulder was rolling towards us. No one since Keating has been willing or able to declare the inescapable truth that we are all going to have to pay – and pay a lot – for providing high quality care for older people and people with disabilities. The alternative is to let our parents and grandparents live and then die in sub-standard care. A couple of how-to-vote payments is not a solution, it’s a declaration of failure.

There are many other issues facing the next parliament. Real action on climate change, an effective and independent anti-corruption watchdog, heath care that saves money by successful early intervention rather than staff and service reduction, safe and considered responses to global conflict, housing affordability, supply chain and manufacturing capability are just some of the immediate issues facing Australia.

I don’t claim to be an expert on any of these issues, but I do promise to give them all careful study. I will listen to experts who are outside the political nonsense of ideology and jobs-for-mates.

Register, share, support or donate if you want me to do be an independent Senator, not just before the election but for the six years after it.

This is a grassroots campaign. I have no major funders and I don’t expect to get any – because I won’t make promises in exchange for money.

If this campaign is going to pay for registration, staff, advertising, artwork, t-shirts, buttons, bumper stickers and all the other paraphernalia of campaigning, it’s going to come from you. I know this is a tough time for everyone. Small amounts from a lot of people can really add up, so if you can spare even a few dollars, please do.

Or if the PayPal button isn’t working try this link