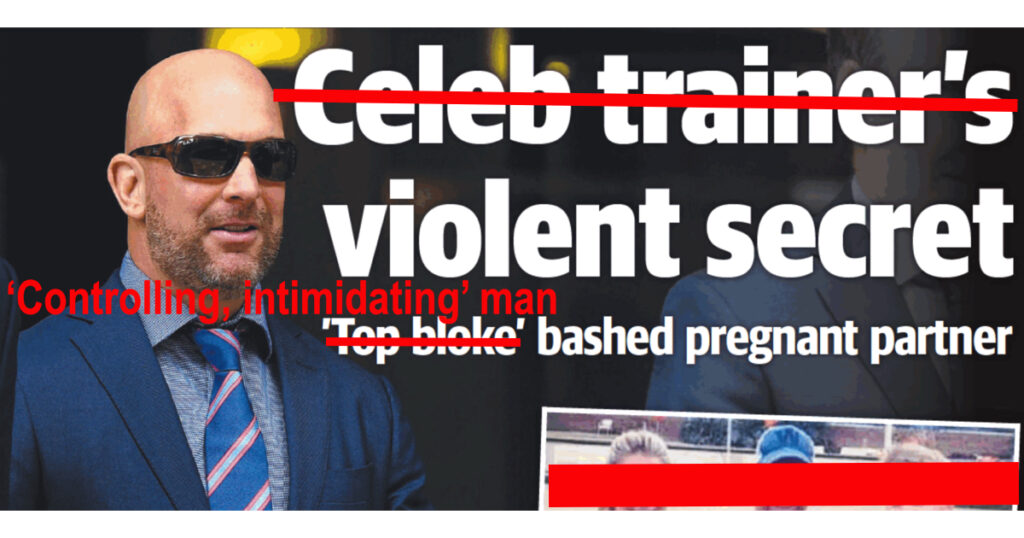 An article on page 9 of yesterday’s Daily Telegraph reported that Wayne Geber was convicted of five assault charges against his partner. The court heard he punched her in the face when she was pregnant, slapped her so hard he perforated her eardrum, put her in a headlock and repeatedly spat at her, and shoved her into a mirror. The judge described his violence, committed over 18 months, as an “abhorrent” ongoing “code of conduct” and said it was “controlling, intimidating and unacceptable behaviour”.

He was convicted and sentenced to 12 months in prison. He immediately appealed and was released on bail.

The Tele found a quote on his website from an alleged celebrity, which described him as a “top bloke”. It was not part of the court case. It was a testimonial on his business website. I’ve been trying, but I cannot think of any valid reason to include this quote in the banner, next to a picture of his face. Nor can I think of any reason to include a photo of Geber with his arms around other alleged celebrities. The decision to publish other quotes from testimonials on his website is equally bewildering.

The woman he abused is a real person, who survived a violent relationship. She, and all the other women like her, deserve better than this obscenity.

“Top blokes” don’t abuse, assault and humiliate their partners. Is this really something that needs to be said? Again? I wouldn’t have thought so, but I guess The Tele is proving me wrong. Again.

previous
FixedIt: NO Indigenous Australians should be killed by police
next
Fixed It: I think you forgot to put the headline in the headline
Subscribe