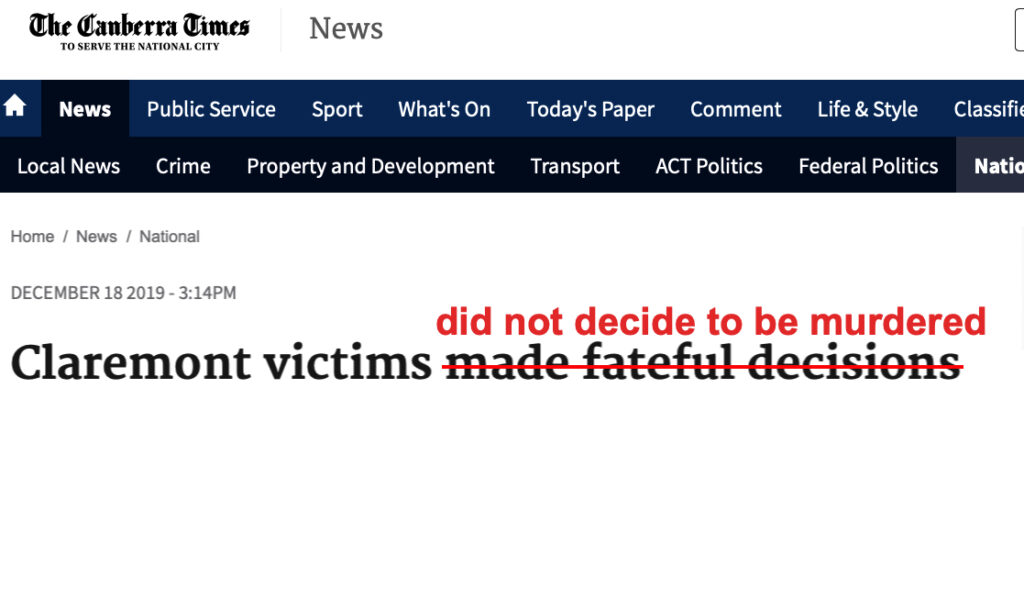 The Canberra Times, along with many other outlets, ran an article by AAP on the trial of Bradley Edwards, who was charged with murdering three women in the 1990s.

The first eight paragraphs describes decisions the women made, and claims that had they made different choices, they might still be alive.

Bradley Edwards is still on trial and has the right to the presumption of innocence. This commentary is not about his guilt or innocence, which can only be determined by the court. It is specifically and only about the way men’s violence against women is described by the media.

It was not a “cruel twist of fate” and it was not decisions made by the victims. The only cause of murder were the choices made by the murderer.

The myth that women who choose to participate in normal life are responsible for the choices made by violent men is ludicrous and dangerous.

A man who wants to kill a woman will always find a victim. If not the woman who is out at night, then the woman coming home from work, or going shopping, or visiting a friend, or staying at home to watch tv. The point is not where she was or what she was doing, the point is that a man wants to kill her.

Are the writers of this article seriously suggesting that if these three women had chosen to barricade themselves in a bunker in 1996, the Claremont murders would not have happened? Of course they would. It just would have happened to different women.

So is only option for all women to make sure they never go out in public alone? Then what are we supposed to do? Live in communes? Because even if we all go home together, at some point someone has to be the last person out of the car. What happens to that woman? Is she the designated victim?

What about women who have to work at nights? Or women who can’t afford cars? Taxis and ubers aren’t safe and the most dangerous place to be for a woman is at home on a Saturday night with a man who claims to love her, so what decisions are we supposed to make that will keep us safe?

This is the crux of it. There are no decisions women can make to stop men killing them, because the choice to kill is not made by the victim. It’s made by the killer.

Telling women their choices led to violence someone else chose to enact is stupid, dangerous and untrue. It demonstrates complete ignorance about the way men’s violence against women occurs and is one of the worst forms of victim blaming because it tells women they have no right to live normal lives or put responsibility for violence squarely where it belongs – on the person who chose to commit the violence.

previous
FixedIt: "child sex" is not a thing
next
Fixed It: rape and sex are not the same thing
Subscribe