This is a slightly edited extract from my book, Teaching Consent: Real Voices from the Consent Classroom

These were the first stories I wrote down when I began teaching consent classes, well before I had any plans to write a book about it. They still haunt me.

BUY YOUR COPY of Teaching Consent from Body Safety Australia and support the organisation that published this book and, more importantly, does the daily work of teaching consent in preschools, primary schools, and high schools all over Australia.

A few months ago, I delivered a workshop on consent for a group of fifteen- and sixteen-year-old students in Melbourne. I waited around for a bit after the class because there’s always someone who needs to know more. A waifish girl, all knees and elbows, crept up to whisper her question. “If something happened and I didn’t say no because I was too scared, it’s my fault, right?”

Eyes full of tears and doubt stared at me as I tried to convince her that of course it was not her fault.

She didn’t believe me. Not really.

I wanted to burn the world to the ground.

Her distraught teacher told me afterwards that everyone in the school knew about the “incident”. The boy in question was in Waifish Girl’s class. They used to be friends. Now he hates her and refuses to even look at her. Distraught Teacher told me she’d talked to the boy about what happened. He was bewildered when she asked him about what he called his “sex life”. He believed at the time (and still does) that it was consensual. “She never said no, not once,” he said. Distraught Teacher said he was genuinely confused when she told him Waifish Girl was too scared to say no. His parents were furious and threatened to sue everyone. His mates made memes about “Rapey Dude”. Sometimes they sent them to Waifish Girl, who had stayed home from school so often that Distraught Teacher was worried she might not finish Year Ten. All their classmates knew about the “incident” and too many of them reacted as if the problem was not that it happened, but that too many people knew it had happened. “She should have just kept it to herself,” declared one so-called friend of Waifish Girl.

Distraught Teacher was beside herself, crying as she told me that she didn’t know what to do to help any of them.

This is what happens when people don’t understand consent. And it is happening at every high school in Australia.

In the relatively new field of teaching consent, inclusiveness and respectful relationships, Deanne Carson is one of the few real experts. She’s been involved in teaching these topics from their earliest years, and worked with academics, teachers, students, and survivors to build on the gender equity work of trailblazing teachers in the 1980s and 1990s.

Consent in her view is both simple and complex. Simple because it’s very easy to define: “consent is when both people actively want to share touch,” she says. But it’s complex because there are so many misconceptions to overcome.

“We wait until children are teenagers to teach them consent,” she says. “By then it’s too late. We haven’t shown them how consent is at the centre of everyday interactions. In many schools they are being taught that ‘no means no’ and are given the legal definitions of sexual assault and rape. It creates an environment where, for some students, it’s almost a question of, ‘how far can I go and still get away with it?’

“Yet, when we teach non-sexual consent to children, they are focussed on ‘what’s right and fair’, what we know as the ethics of intimacy. When we take this approach in primary school, or better yet in preschool, they come to conversations about consent as teenagers being curious about how to take care of themselves and each other. They want to ensure that if they do have sex, not only is it legal, but it is also both physically and emotionally safe.”

We do children a disservice when we talk about consent exclusively as an aspect of sexual relationships and therefore something that only applies to older people. Most of them instinctively understand it as an approach to fairness and every adult who has heard an impassioned “that’s not fair” from a four-year-old knows how important this concept is to little children.

Deanne once told me about a conversation she had with kindergarten teachers when she was training them on teaching consent and empathy for little children. The teachers were troubled over a four-year-old boy who was persistently trying to hug his little friend of the same age. Little Friend was finding it overwhelming and annoying. Persistent Boy was anxious and upset. The teachers patiently explained boundaries and empathy to him. “Little Friend doesn’t want to hug you right now,” they’d say. “It’s not ok to hug Little Friend when he doesn’t want you to.” “Do you understand how it makes Little Friend feel when you hug him against his will?” Persistent Boy understood everything the teachers were saying and was very sorry Little Friend felt bad, but he still couldn’t stop himself.

The teachers presented this problem to Deanne as their failure to properly explain boundaries and empathy to Persistent Boy and wanted to know how they could improve. Deanne gently asked what they thought was happening for Persistent Boy when his hugs were rejected. They gave her the answers they thought she wanted, answers that would show they understood her training and were trying to implement it: “He’s not respecting boundaries” “He’s not understanding consent.” “He’s failing to empathise.” “He doesn’t understand why it’s wrong.”

“Are you sure?” Deanne asked, “you’re telling me Persistent Boy is sad that Little Friend is upset by him, that he knows he can’t hug him without consent, and he knows he should stop when he’s asked. He’s very aware of the boundaries and that he’s doing the wrong thing by breaking them. So, what is happening inside him that he can’t stop himself?”

This changed the conversation, and they started talking about the source of the problem – rejection. Persistent Boy thought all these little rejections meant he might be unloved, maybe even unlovable.

When children internalise rejection even the most trivial act can feel life-threatening. You don’t want me or care about me. No one will care for me. I am a helpless child and will die without care. If I am to live, you must love me! It’s a visceral cri-de-coeur, almost always misinterpreted as “attention-seeking” or “bad” behaviour.

The only way Persistent Boy knew how to react to rejection was to keep begging. Trying to redirect him by suggesting more empathy for Little Friend without acknowledging his feelings of rejection only made him more afraid, more in need of reassurance, and so the cycle continued.

Persistent Boy and Little Friend were only four years old. They’re not supposed to be able to manage their emotions or understand complex internal worlds. That’s what the best parts of education and family life are for – to teach them as they grow.

But what if no-one ever teaches Persistent Boy to understand rejection as something he doesn’t need to fear as life-threatening? What happens when he becomes Persistent Teen with his first girlfriend? He’s in love. He wants sex, not only because of physical desire, but because he loves her and believe sex is an expression of that love. If she says no and he enacts the sixteen-year-old sexual version of persistently seeking a hug, his girlfriend will be under enormous pressure. This is not a theoretical exercise, it’s a common story we hear from sixteen-year-old girls. Pressure, persistence, endless asking. “Are you ready now?” “How about now?” “Now?” “Are you sure?” “What about now?”

Too many negotiations of sexual consent follow this pattern. It’s about so much more than just the sexual act. Each person comes to it with very fragile emotions, and it is laughably insufficient to give them nothing but “yes” or “no” to work with.

If, as happens too often, Persistent Teen’s fear of rejection is expressed as aggression or violence, the rape he then commits has lifelong consequences. Most deeply for the girl he rapes, but also for him, in how he thinks of himself and how he approaches love and rejection from all the Pressured Girlfriends in his future.

Persistent Teen isn’t four years old. He is much closer to adulthood, and he has a quasi-adult responsibility to manage his emotions. He is certainly old enough to take responsibility for harm he inflicts on others. But when is he old enough that we can blame him for not learning something he was never taught? When does it become his responsibility to know rather than the responsibility of the adults who care for him to teach? What do those adults do if consent is something they have never been taught themselves?

Parents and families who don’t understand consent education occasionally think such programs are dangerous – that they will teach children how to have sex, rather than how to understand, manage, and respond to how they and their partner feel about sex. Sometimes these parents complain to schools, or even to the media. Schools who have been the object of outraged misinformation on the front page of a newspaper are understandably reluctant to continue those programs. And then all the Waifish Girls and Persistent Boys are left, bewildered and injured, trying to work these problems out alone.

BUY YOUR COPY of Teaching Consent from Body Safety Australia and support the organisation that published this book and, more importantly, does the daily work of teaching consent from preschool to Year 12.

Note: In the introduction to the book I wrote about the difficulty of telling children and young people’s stories when they cannot give fully informed consent for their stories to be made public, and how this usually leads to their stories being ignored and forgotten. There are no factual accounts in this book. They are multiple threads from a myriad of stories woven together to tell the true stories of sex, consent, rape, survival, joy, and shame. If you think you recognise any of the people in this extract (or in the book) it’s because their story is so familiar, not because I wrote any of it about a single encounter.

All of it is true. None of it is you. 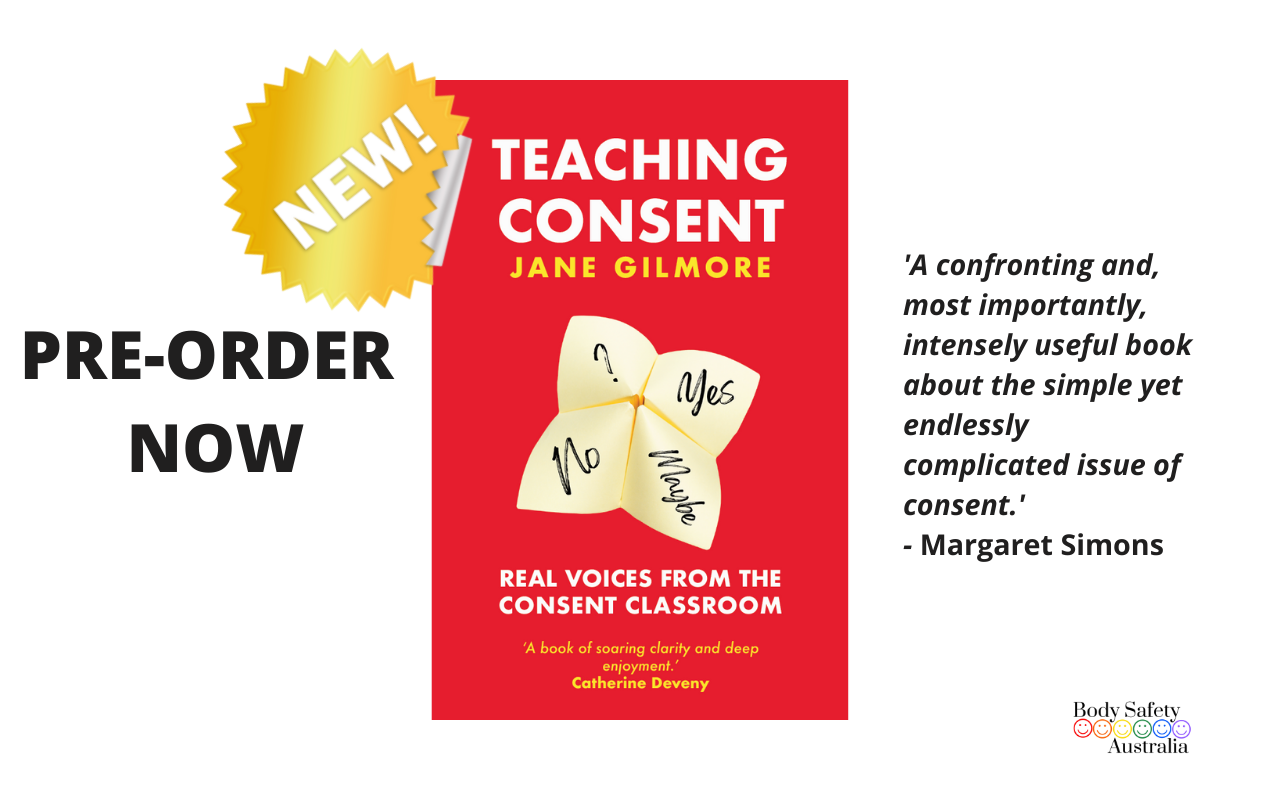 My new book on consent education!