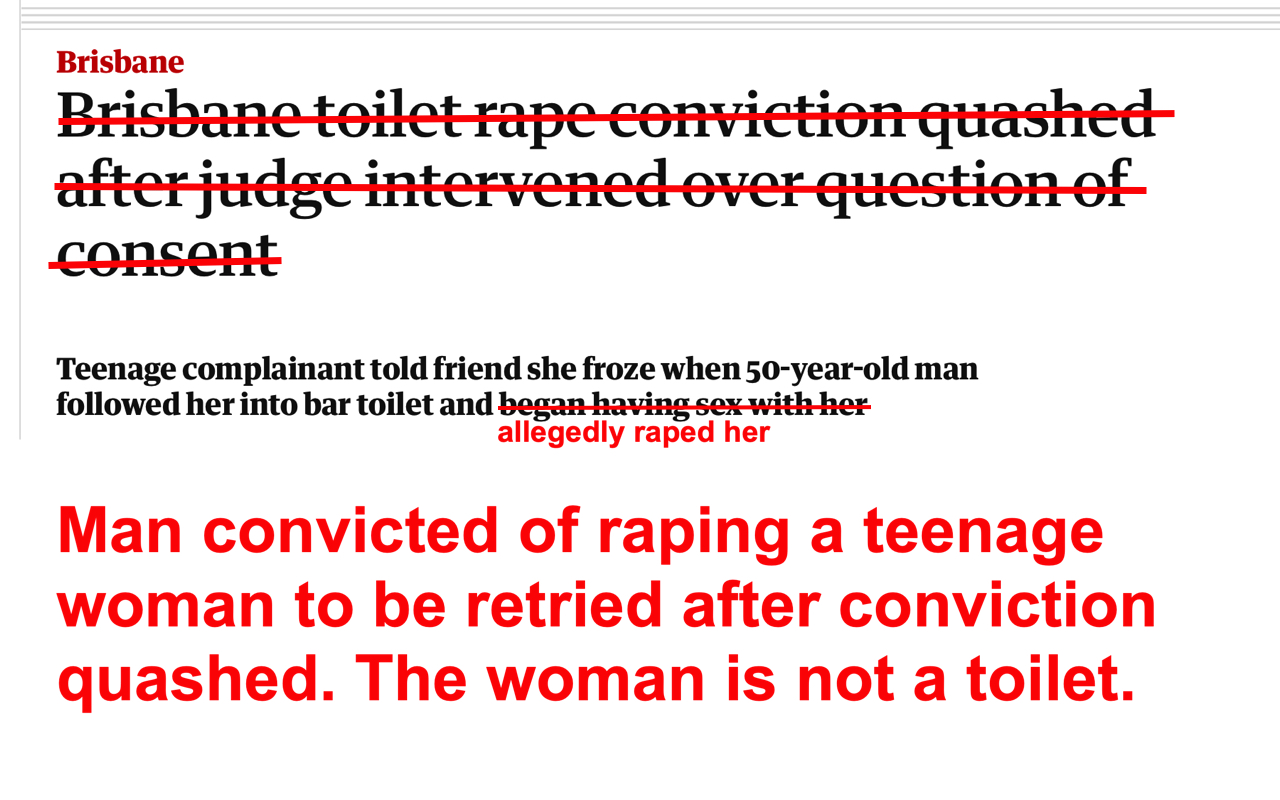 I’ve already said this once this week but it seems I need to say it again: violent men have sexually assaulted more than half our promising young women and we’re still hiding those alleged rapes behind buildings and toilets. It’s lazy, insulting, misleading, inaccurate, and ill-informed journalism.

The Guardian (?!) reported that a 50 year old man convicted of raping a 19 year old woman had his conviction quashed. The headline described it as a “toilet rape”. The man was not accused or convicted of raping a toilet. He was accused and convicted of raping a woman. The appeals court quashed the conviction on the grounds that the judge’s questions and summary constituted a miscarriage of justice and the man will be retried for the alleged rape (read the full details of the appeal’s courts decision here). The Guardian also described the alleged rape as “having sex”. Sex is not a crime and he is not charged with “sex”. It is an allegation of rape that needs to be tested (again) in court.

The man is once again entitled to the presumption of innocence. Any public speculation about his guilty or innocence could put the retrial at risk. Please be very aware of this if you are making any comments on social media posts.

Erasing women who are alleged victims of violent men is a common and tired media trope . The Courier Mail reported on a “toilet sex attack” last year. News Corp outlets reported on another “toilet rape” in 2019. Earlier this week 9 News reported a “barracks rape“. There’s also been a “granny flat rape“, countless “Tinder rapes“, an “alley rape“, an “alleyway rape“, a “vehicle assault“, a “bungalow death“, an “Ice rapist” and these are only a very few of the thousands of women who have been erased from headlines about the men who allegedly raped or murdered them.

This headline habit is stupid and cruel and needs to stop. Now.

If you’re reading this on social media, links to all the articles are on the post on my website: www.JaneGilmore.com

previous
FixedIt: He didn't rape the barracks
next
FixedIt: a dead woman is not a "bag-of-bones"